First Light for New Advanced Infrared Instrument at the NTT

SOFI, ESO's new infrared imager/spectrometer, saw first light at the NTT telescope on December 6, 1997, as planned and less than two years after the start of its detailed design. The acronym stands for 'Son OF ISAAC', the larger Infrared Spectrometer And Array Camera being built by ESO for the VLT.

SOFI's power lies in its state-of-the-art, megapixel, array detector which is sensitive to infrared radiation at wavelengths between 1 and 2.5 microns, i.e. 2 to 5 times longer than that of normal visible light.

The Press Release is accompanied by a selection of the infrared images and spectra obtained during the first test which well illustrate the new level of excellence now offered by the SOFI/NTT combination. Not surprisingly, the competitive demand for access to this new facility is extremely high amongst Europe's astronomers.

Much development time for SOFI was saved by copying some of the technical solutions adopted for ISAAC and using the same detector acquisition system and control software.

In addition to delivering a new state-of-the-art instrument for the ESO La Silla Observatory, therefore, the project has also provided an important opportunity to test these critical elements at the newly upgraded NTT telescope prior to installation of the more complex ISAAC instrument at the VLT. Beyond the strictly instrumental aspects, this includes relatively novel operational features of the VLT such as the automatic execution of complex observation sequences via pre-prepared Observation Blocks and pipeline reduction and calibration of the data obtained.

Operational commissioning of these aspects of the system plus Science Verification Observations are planned to begin in March 1998 and the first Visiting Astronomers are already scheduled to use SOFI in June 1998.

SOFI: a multimode instrument of the new age

Optically, SOFI is a relatively complex instrument equipped with a variety of filters, grisms and polarizers which can be combined to yield several imaging and spectroscopic modes for different scientific investigations [1]. At its heart is the advanced 1024x1024 pixel infrared array detector (a Hg:Cd:Te array of the `Hawaii' type, developed by the Rockwell International Science Center), which has nearly 300 times more pixels and a factor of 100 less electronic noise than the detectors used in the first infrared astronomical cameras only a decade ago. It is also cosmetically exceptional (few 'bad' pixels) with the result that the quality of the infrared images is now approaching that obtained with CCD detectors in the visible.

ESO Press Photo eso9805 shows SOFI mounted at one of the Nasmyth foci of the NTT telescope. One of the complications of such instruments compared to those operating at visible wavelengths is that the optics and detector must be cooled to about -200 C o within a vacuum vessel and are therefore neither visible nor easily accessible.

Not all the data obtained during the test have yet been fully analyzed. Overall, however, the performance achieved appears to be very close to expectations [2]. They were obtained by ESO astronomers Alan Moorwood (PI), Jean-Gabriel Cuby (Instrument Scientist) and Chris Lidman (NTT Support Astronomer) during the SOFI tests.

[1] Observational modes already implemented in SOFI include imaging in broad and narrow band filters with pixel scales between 0.29 and 0.075 arcsec/pixel and a maximum sky field of 5x5 arcmin; imaging polarimetry and low resolution (R about 600) spectroscopy using two grisms covering the 1-2.5 micron range. An additional medium resolution (R about 3500) spectroscopic mode is foreseen.

More detailed information about SOFI will be found at the dedicated website (URL: http://www.eso.org/sci/facilities/lasilla/instruments/sofi/. The March 1998 issue of the ESO Messenger will contain a special section on the first SOFI results and the instrument itself. 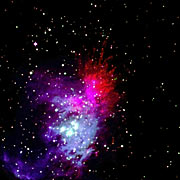 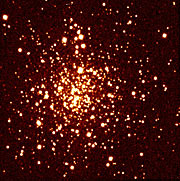 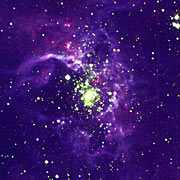 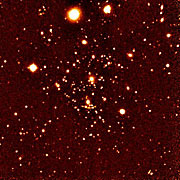 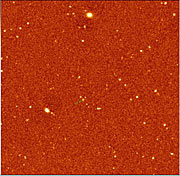 PR Image eso9805g
SOFI mounted at the ESO NTT telescope
Send us your comments!
Subscribe to receive news from ESO in your language
Accelerated by CDN77
Terms & Conditions