A VLT Spectrum of a Gravitationally Lensed Galaxy

The galaxy cluster 1ES 0657-55 is located in the southern constellation Carina (The Keel), south of the Milky Way band. Its redshift has been measured as z = 0.29. It is a source of strong and very hot X-ray emission and has an asymmetric galaxy distribution, indicating a large mass and recent formation. Images obtained with the ESO 3.6-m New Technology Telescope (NTT) at La Silla have revealed the presence of an arc , i.e. presumably a background galaxy at larger distance, whose image is strongly distorted by the gravitational field of this cluster.

Thanks to the excellent image sharpness (the small pixel size provides sufficient spatial sampling), it is obvious that this arc is very thin and long (upper right). Other arcs and arclets are also visible.

The spectrum of the arc

Photo eso9919c displays the spectrum of the most prominent gravitational arc in the galaxy cluster 1ES 0657-558 , as obtained at VLT UT1 with the FORS1 instrument in December 1998. The total exposure time was 1.5 hours. It shows absorption lines of hydrogen (Lyman-alpha and Lyman-beta) as well as lines of silicium, oxygen carbon and iron.

From the measured wavelengths, the redshift of the arc is determined as z = 3.23. An earlier, much less accurate photometric redshift estimate (from the observed colours) is confirmed and refined by this spectral observation.

Star forming galaxies at lower redshifts have very similar spectra. It is therefore concluded that this arc is the gravitationally distorted image of a distant galaxy caught in its formation stage , when the Universe was only about 2 billion (2,000 million) years old.

The new FORS data will allow a much more detailed modelling of the gravitational lens and a better estimate of the cluster mass than was possible before.

There are several additional strong lensing features visible in the field. These are probably the images of objects at even higher redshift that are distorted into multiple images or arc(let)s. Follow-up observations with VLT UT1 and the ISAAC instrument with infrared imaging and spectroscopy will be essential in order to achieve an exact determination of the redshifts and corresponding distances of these faint, red arcs.

The foreground cluster magnifies the images of background galaxies. The conspicuous arc is magnified, e.g., by approximately a factor of 20. This effect assists the VLT by acting as a natural, second light collecting facility. The cluster thus provides a deeper look into the universe behind it, and "supports" the identifaction and investigation of distant and young galaxies. 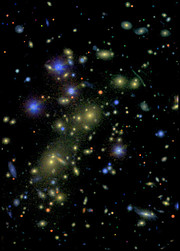 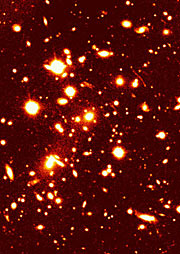 PR Image eso9920w
Spectrum of arc in cluster 1ESO657-558 (z=3.23)
Send us your comments!
Subscribe to receive news from ESO in your language
Accelerated by CDN77
Terms & Conditions