New VLT Observations Address the Age of the Universe

Recent observations with the FORS1 instrument at the first 8.2-m VLT Unit Telescope (ANTU) by an international group of astronomers [1] have resulted in crucial new information about some small and faint stars within an old star cluster in the Milky Way.

Thanks to the enormous light gathering power and, not least, the excellent optical quality of ANTU , it was possible for the first time to obtain detailed spectra of several very faint stars in the globular cluster NGC 6397 . Earlier images with the Hubble Space Telescope (HST) hinted that they might be White Dwarf Stars (WDs) , i.e. Earth-size, hot and extremely dense stars that represent the end products of the evolution of stars like the Sun.

The VLT spectra confirmed this classification and, even more important, have also permitted a first determination of the stellar spectral type, temperature and surface gravity, as well as the mass of four WDs in NGC 6397 . In particular, the astronomers learned that the brightest of the four observed WDs has a mass of about 0.35 solar masses, much lower than the mean mass of 0.55 - 0.65 solar masses that is typical for local white dwarfs.

This means that the precise distance determination to a globular cluster, from a comparison of its WD stars to more nearby WDs with well-known masses and distances, will now be possible, provided the individual properties of the cluster WDs are well determined from such spectroscopic observations [2]. The mass strongly influences the brightness of a WD and comparing a low-mass globular cluster WD to a more massive local WD would underestimate the distance to the globular cluster. As these stars are very faint, the spectroscopic observations required for their analysis are very difficult and can only be done with large telescopes like the VLT.

Accurate distances to the globular clusters allow to determine their age accurately. Milky Way globular clusters like NGC 6397 are believed to be the oldest stellar aggregates in our Galaxy. Their age therefore represents a lower limit to the age of the universe (the time since the Big Bang), currently estimated in the range of 13,000 - 16,000 million years. These VLT observations represent one crucial step towards improving both distance and age determinations.

The new VLT observations involve White Dwarf Stars (WDs) . Astronomers have known these strange objects for over a century.

The first WD to be discovered was Sirius B , a companion to Sirius , the brightest star in the sky. It was first seen in 1862 as a faint point of light, quite difficult to discern next to Sirius . When the spectrum of Sirius B was later obtained, it turned out to be very unusual, with strong and broad absorption lines by hydrogen. Detailed studies have since revealed that it is a very small stellar object, about the size of the Earth, but still as heavy as the Sun. The density of Sirius B is thus enormous - one million times greater than that of the Sun, or about 1 ton/cm 3 !

Many other WDs have since been discovered, with those now studied in NGC 6397 being the most distant ever. Some of them are single, others are members of double star systems like Sirius B . It is now also known that they represent the evolutionary end-product of stars with masses up to a few solar masses (heavier stars will explode as supernovae ). A WD is in fact the "burnt-out" stellar core that is left behind when a star like the Sun shreds its outer layers towards the end of its active life. This process normally also leads to the formation of a surrounding nebula. Many such planetary nebulae with central WD stars are known in the Milky Way [3].

The colours of some WDs are very blue, indicating that they are very hot; indeed, surface temperatures of up to 50,000 or even 100,000 °C are common. Contrary to normal stars, the WDs possess no inner source of energy. They are stellar bodies that slowly cool, as they radiate into space the remnants of energy left over from their earlier phases.

Globular clusters are large aggregates of stars; over 100 are known in our galaxy, the Milky Way. The largest contain millions of stars. They are some of the oldest objects observed in the universe and were presumably formed at about the same time as the Milky Way Galaxy, in the early phase after the Big Bang.

With the Hubble Space Telescope (HST), a number of very faint and blue, star-like objects were found in some of the nearest globular clusters. From the measured brightness and colour, they appeared to be WDs, i.e. cluster stars that had already reached the final stage of their evolution.

However, detailed spectra were needed to confirm this identification and the stars were too faint for this type of observation to be done with the HST.

The VLT Observations in NGC 6397

The present research programme has profited from the excellent performance of the VLT and its astronomical instruments to explore in unrivalled detail some of the faint and blue objects in the globular cluster NGC 6397 . It is located within the constellation Ara (The Altar), at a distance of about 8,000 light-years and south of the galactic centre.

Following a detailed proposal to the ESO Observing Programmes Committee, VLT observing time for this programme was granted in early 1999 to the team and the observations took place during the night of September 3-4, 1999. For this, the FORS1 multi-mode instrument at VLT ANTU that is optimized to record the light from very faint objects was used in the so-called Multi-Object-Spectroscopy (MOS) mode . A number of narrow slits at the focal plane were adjusted so that the light from several WD candidates in NGC 6397 passed through and their spectra could be registered simultaneously.

This efficient observing technique makes it possible to obtain several spectra under equal observational conditions. This saves much precious telescope time and also facilitates subsequent, direct comparison. The present observations demanded the utmost positioning precision, to suppress as far as possible the glare from many other, much brighter stars in this crowded field.

The set-up of the slits was facilitated by accurate positional measurements on a CCD image, previously obtained with the Hubble Space Telescope (HST), cf. ESO Press Photo eso9953 . The fact that the VLT observations took place during a period of excellent seeing, better than 0.55 arcsec, further contributed to the effective "isolation" of the light from the WD candidates.

Due to the faintness of these stars - they are of magnitude 23-24, i.e. 7 - 15 million times fainter than can be perceived with the unaided eye - even with ANTU/FORS1 exposure times of 90 min were needed to register their spectra with a sufficiently high signal-to-noise ratio.

The spectra of four candidate WDs, recorded by FORS1 during these observations, are shown in ESO Press Photo eso9953 . They are characterized by the presence of several wide absorption lines of hydrogen, all typical in WD spectra and thus clearly identifying these objects as such.

Although they may look quite similar to the eye, a preliminary analysis reveals important individual differences. In particular, the shapes of hydrogen lines may be used to estimate the temperature and (surface) gravity in the shallow atmospheres; the best value for the temperature derived from the spectrum of the brightest star (WF4-358 ; the uppermost spectrum) is about 18,000 °C.

The masses of the WD stars can be deduced from the temperatures and surface gravities. Interestingly, the four stars are found to have different masses, with about 0.36 solar masses for WF4-358 and about 0.50 solar masses for the others. The presence of such a spread in mass may bias the distance determination if one assumed that all the WDs in a globular cluster have the same mass.

Continuation of this work

The next step will be to obtain better spectra of the White Dwarfs in NGC 6397, that will allow to derive the stellar parameters more accurately. It is also planned to extend this project to two more globular clusters, in which white dwarf candidates have been found with HST.

The team has described the new results in a scientific article, submitted to the European research journal Astronomy & Astrophysics .

[2] This method to determine astronomical distances is based on the fact that the brightness of an object is inversely proportionate to the square of the distance. If two stars are identical in all respects, and if the distance to one of them is known, the distance to the other one can therefore be accurately determined from the measured (apparent) brightness difference. However, if they are not absolutely identical, e.g. if their masses and thus their intrinsic brightness differ, a suitable correction will have to be applied.

[3] One spectacular example of a planetary nebula with a central White Dwarf star is the Dumbbell Nebula, observed last year with the VLT. 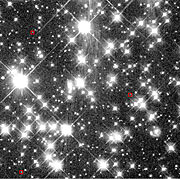 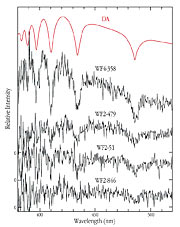 PR Image eso9953b
Spectrum of white dwarf stars in NGC 6397
Send us your comments!
Subscribe to receive news from ESO in your language
Accelerated by CDN77
Terms & Conditions