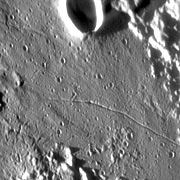 Imagen eso0222a
"Walking on the Moon" with the VLT