Astrobiology has become the meeting point for Astronomers, Biologists, Geologists, and Climatologists interested in putting together the puzzle of how life originated in the Universe.  Each year since the discovery of the first extra-solar planet of a Solar-type star (51 Pegb), almost 20 years ago, humanity is one step closer to the discovery of the first Earth-like planet in the habitable zone of its parent star, and the road-map leading to discovery of exolife has already been sketched by the world’s major agencies.

A real armada of space missions is already scheduled to launch in the next decade such as JWST, TESS, CHEOPS, and PLATO. Ground-based telescopes in Chile, on the other hand, are deploying a powerful new suite of instruments designed to find and characterise exoplanets, such as GPI in Gemini, and ESPRESSO and SPHERE at the VLT. Additionally, Chile concentrates several extreme environments like the driest desert and areas with the largest density of thermal sources in the World, targeted by Astrobiologists in Biological and Geological Sciences.

Chile is becoming one of the major poles of astrobiology worldwide with active research groups at several major universities and observatories. An important activity of the astrobiology community in Chile is the organisation of a major biennial symposium of astrobiology in Chile bringing together astronomers, biologists, geologists, and climatologists from all over the world to discuss the most recent progress in the quest for exolife. AstroBio 2015 is the third symposium of this series.  The main aims of this symposium will be to:

1.      Bring together the major astrobiology groups from the World and their South American counterparts

2.      Foster exchanges across all the major disciplines involved in the field of astrobiology and in particular people working on climatology of Solar System planets;

3.      Include a strong parallel outreach program aimed at informing the public about this relatively new discipline with the participation of the main experts in the world in the various disciplines. 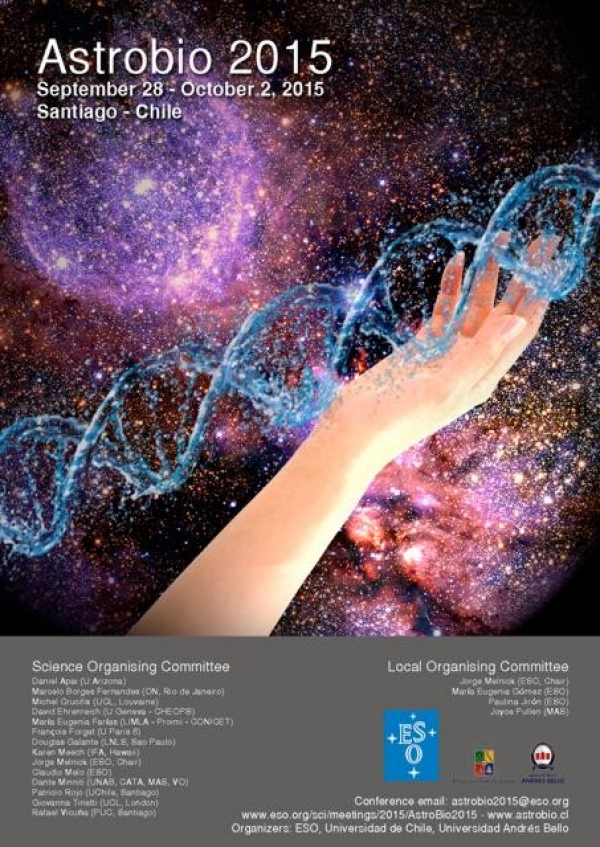