Behind the scenes at ESO: Showing you the road to the stars
What you’ll discover in this blog post:
Exoplanets are one of the hottest topics in astronomy, and the stuff they’re made of is especially fascinating. Not so long ago, astronomers thought that exoplanets were created from the same interstellar materials as their parent stars, so they must have similar compositions. But in many recently-discovered systems, planets have wildly different compositions to their host stars, turning theories of planet formation on their head. One such planet, named K2-106b, is more than twice as dense as Earth and even denser than lead! Puzzlingly, the parent star of this heavy metal planet has a much lower metallicity than the planet itself. We asked Eike Guenther, the astronomer who led the research on this intriguing system, to fill us in on the details.

Q: In our Solar System we already have eight different planets, so why is it exciting to look elsewhere and study exoplanets?

A: We basically have two species of planets in our Solar System: dense rocky planets that are Earth-sized or smaller, and less-dense gas giants of 15–318 Earth-masses. Rocky planets populate the inner Solar System, while the gas and ice giants orbit in the outer regions. Quite naturally we used to think that all planetary systems would look like our own. However, in the past few decades, we’ve learned that exoplanets are far more diverse than we thought.

We’ve not only found that gas giants can be close to their stars — hot Jupiters — but we also discovered two entirely different species of planets! Super-Jupiters are planets more massive than Jupiter and unexpectedly can have higher densities than the rocky planets in our Solar System. Super-Earths (also known as mini-Neptunes) have masses somewhere between Earth and Neptune, and their densities are surprisingly diverse; some have high densities, others low, and planets of the same mass can actually have very different densities. Without exoplanet research, we never would have known that these classes of planet exist and that planets can be so excitingly varied.

These three planetary discs were observed by the SPHERE instrument, mounted on ESO’s Very Large Telescope. The observations were made in order to shed light on the enigmatic evolution of fledgling planetary systems. The central parts of the images appear dark because SPHERE blocks out the light from the bright central stars to reveal the much fainter structures surrounding them.
Credit: ESO

Q: Tell us about your recent work on the planets orbiting the star K2-106. What did you discover?

A: Although exoplanets have hugely diverse properties, we’d always assumed that on the inside, they’re not that different. All planets should have a core, so really the only difference should be the thickness of their hydrogen atmosphere. Using this model, it’s easy to explain the diversity we observe: some planets accrete a lot of hydrogen when they’re young, while others either accrete only very little or lose it as they age.

In our research we focused on ultra-short period planets, which orbit around their stars in less than a day and are exposed to high levels of X-ray and UV radiation that strips away their hydrogen atmospheres. We can try to figure out the composition of the leftover cores by measuring their densities. The first investigations some years ago seemed to suggest that ultra-short period planets have Earth-like compositions, made up of 30% metals and 70% silicates. Then in 2004, the first outlier was discovered — planet 55 Cancri e had a slightly lower density than expected. But the big surprise came this year when we discovered K2-106b. Using radial velocity measurements made with high-resolution spectrographs, including the exoplanet hunter HARPS on the ESO 3.6-metre telescope, we determined the planet’s diameter. From this, we could calculate its density of approximately 13 g/cm3 — huge compared to Earth’s 5.5 g/cm3. This density can only be explained if the planet has an enormous metal content: 80% of its mass is metal! So this heavy metal planet has a completely different composition than the Earth. For the first time, we’d found a “rocky” planet that’s not really rocky — it’s basically just a metal sphere.

The ESO 3.6-metre telescope at the La Silla Observatory in Chile, home to the HARPS instrument
Credit: ESO

Q: But the parent star of K2-106b has a normal metallicity. How could this star and its “heavy metal” planet form from the same cloud of interstellar gas and dust?

A: The planet could have lost its outer envelope of gas in a giant impact, but that’s not so plausible as the planet must have lost about 10 Earth-masses of material. The other possibility is that the planet formed from a material that was already metal-rich. 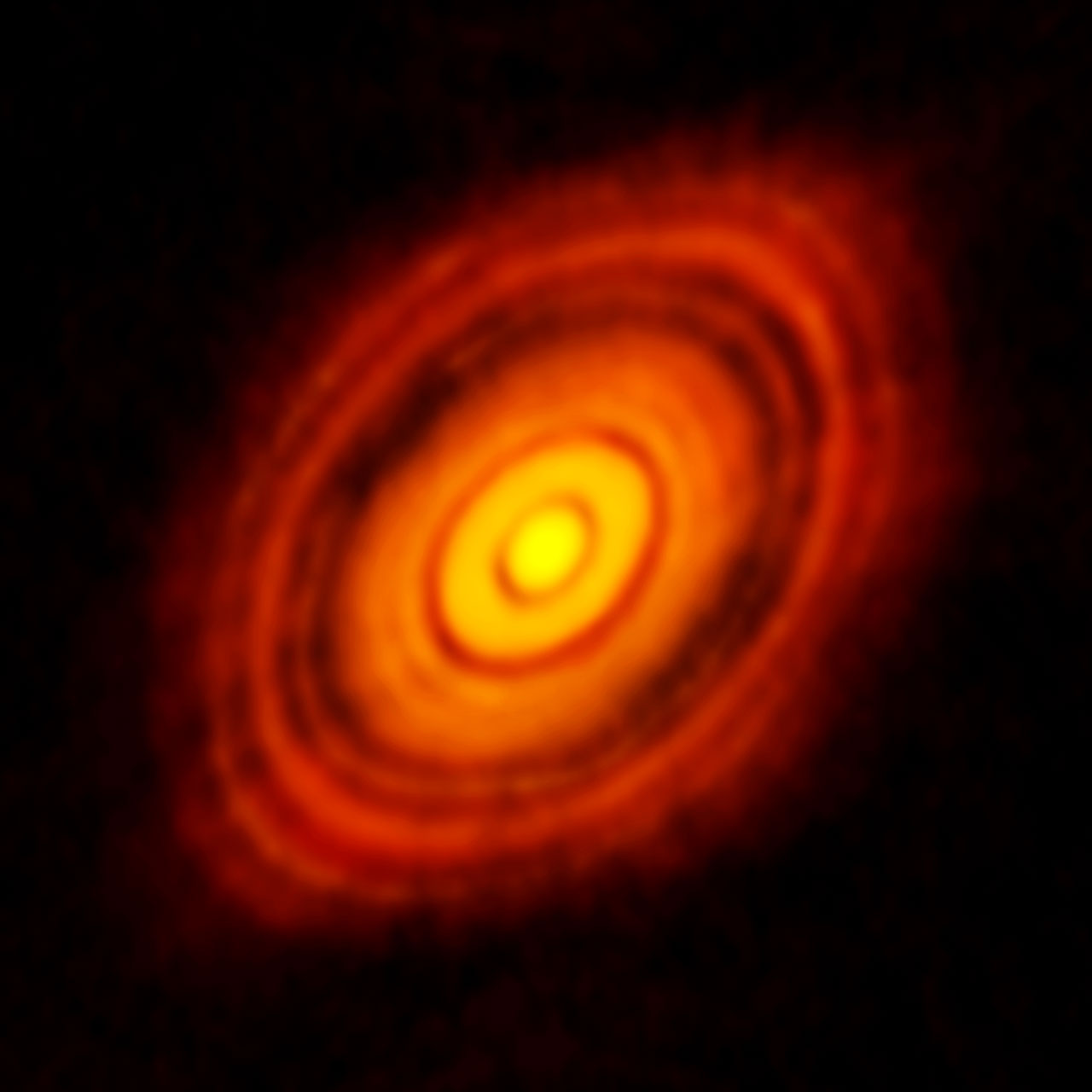 This ALMA image shows the protoplanetary disc surrounding the young star HL Tauri, revealing substructures within the disc that have never been seen before. It even shows the possible positions of planets forming in the dark patches within the system.
Credit: ALMA (ESO/NAOJ/NRAO)

Since the composition of a protoplanetary disc varies at different distances from a star, we reasoned that K2-106b could have formed in the inner part of the disc. The same conclusion was actually drawn by the MESSENGER mission to Mercury — Mercury didn’t lose its silicate mantle; rather, it formed from a metal-rich material. But Mercury only has 6% of the mass of Earth, while K2-106 is 8 times more massive than Earth. Explaining the formation of such a massive planet in the inner disc is quite a challenge for current theories because in most models there isn’t enough material there for a huge planet to form! However, new observations, especially with ALMA and the Very Large Telescope Interferometer, indicate that material is actually very unevenly distributed in protoplanetary discs, so we have to rethink the assumption that there’s not enough material.

Q: Why is it useful to discover extrasolar planets that look nothing like those we recognise in our Solar System?

A: Prior to the discovery of exoplanets, our models very neatly explained the formation of our Solar System. But after we discovered that exoplanets are so diverse, our theories of planet formation had to be revised. For example, older theories didn’t predict that gas giants could exist close to the host star, but once they were found in other star systems, theories of planet migration were developed. Now with the discovery of K2-106b, we need theories that can also explain how such an extreme object can form.

Studying planets that are unlike those like in our Solar System might also help us understand which planetary ingredients are essential for the formation of life. 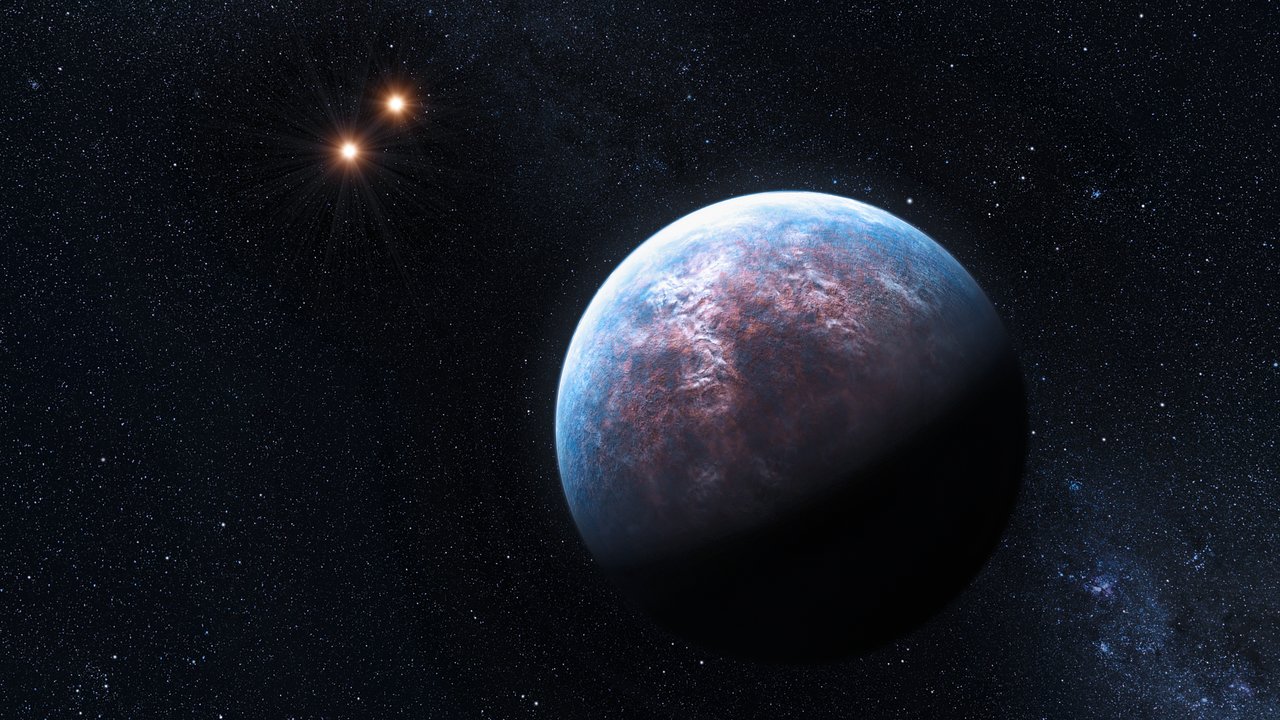 In 2009 the HARPS spectrograph discovered an exoplanet with six times the mass of the Earth orbiting a low-mass star called Gliese 667 C, which belongs to a triple star system.
Credit: ESO/L. Calçada

Q: In your research, you use very modern tools such data models and simulations, but you also use Kepler’s 400-year-old laws of planetary motion. How much do you think the science of exoplanets has evolved over the last few centuries, or even over your career? 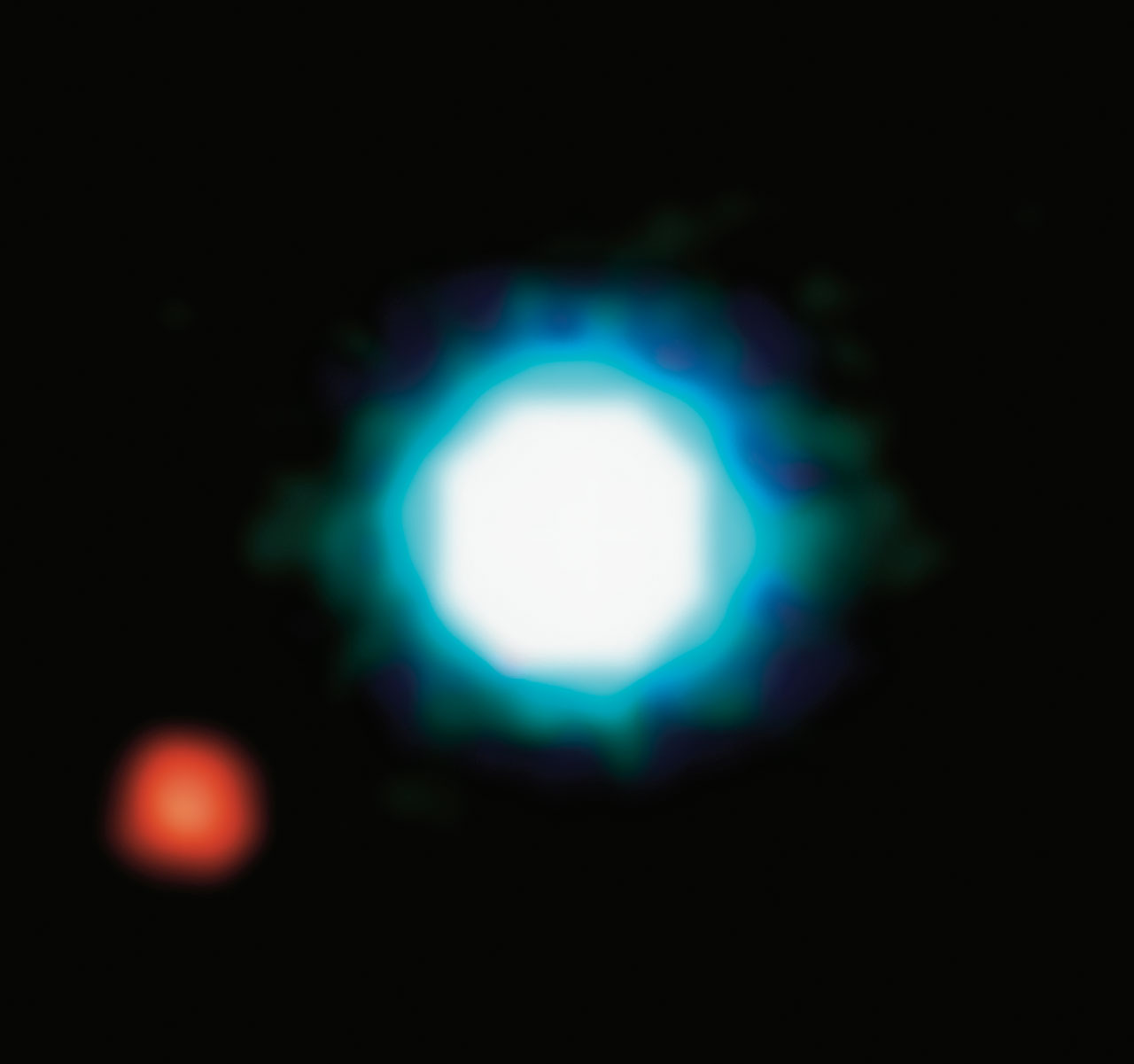 This composite image shows an exoplanet (the red spot on the lower left), orbiting the brown dwarf 2M1207 (centre). 2M1207b is the first directly imaged exoplanet and the first discovered orbiting a brown dwarf. It was imaged for the first time by the VLT in 2004.
Credit: ESO

A: It’s fascinating that shortly after the Copernican Revolution people had already begun to speculate about other Earths, changing people’s views about the uniqueness of our planet. For example, the 1686 book Entretiens sur la pluralité des mondes, written by Bernhard le Bovier de Fontenelle, was a dialogue about the plurality of worlds. But what’s changed is that today, we can now address these ideas scientifically. In the last 10 or 20 years, the field of exoplanet research has changed dramatically and unexpected discoveries have played a key role in the direction of our research — for example, the discovery that gas giant planets can exist close to their parent stars led us to the idea of planet migration. Equally exciting were the discoveries of planets like 2M1207b and the HR8799 system, which led to the idea of planet formation via disc fragmentation. It’s always exciting because it’s the unexpected results, not the expected ones, that change our views.

Q: What’s next for your research and for the study of planet formation in general?

A: Our next step in the near future is pretty clear to us. With the upcoming ESPRESSO instrument on ESO’s Very Large Telescope (VLT), we’ll have the chance to determine the masses of planets to a much higher accuracy than ever before, which should tell us if high-density planets like K2-106 are rare or common in the Universe. If the latter is the case, then our theory of planet formation will need to evolve in a new direction.

Over longer timescales, the study of planetary atmospheres will become a cornerstone in the story of planet formation. Exciting studies in this respect have been done with the VLT, but the big leap forward will certainly be the Extremely Large Telescope (ELT), which will allow us to study the atmospheres of smaller planets. Another aspect, which we’re only now beginning to study, is the evolution of planets. It’s truly thrilling to think that the ELT will have the capability to detect a lava planet, like the Earth shortly after it formed. It would be fascinating if we could really “see” how an Earth-like planet actually forms!

Eike Guenther’s future career was sealed from an early age, growing up in an old observatory in Kiel, Germany. He completed his PhD at the Max Planck Institute for Astronomy in Heidelberg and went on to a postdoctoral position at the then-called Queen Mary and Westfield College in London. Eike’s career in the field of exoplanets was kickstarted at the famous “cool-star” conference in Florence, when the discovery of the first brown dwarf and the first exoplanet was announced. He later worked on the space observatory mission CoRot, particularly on the exciting system of CoRoT-7b, and is currently working in the KESPRINT team, studying the diversity of exoplanets using data from the Kepler satellite. Email: guenther@tls-tautenburg.de