Behind the scenes at ESO: Showing you the road to the stars
What you’ll discover in this blog post:
High up in the mountains of Chile, ESO’s telescopes are literally built on shaky ground. They operate in some of the most active seismic regions in the world, at the edge of a tectonic plate where earthquakes are a constant threat. But the telescopes are well-equipped to face these dangers with anti-seismic technology that protects their most delicate components. We talked to ESO engineer Max Kraus about a new system that will shield the forthcoming Extremely Large Telescope from our active planet.

Q: Let’s begin with a basic question: what are earthquakes and why are they common in Chile? 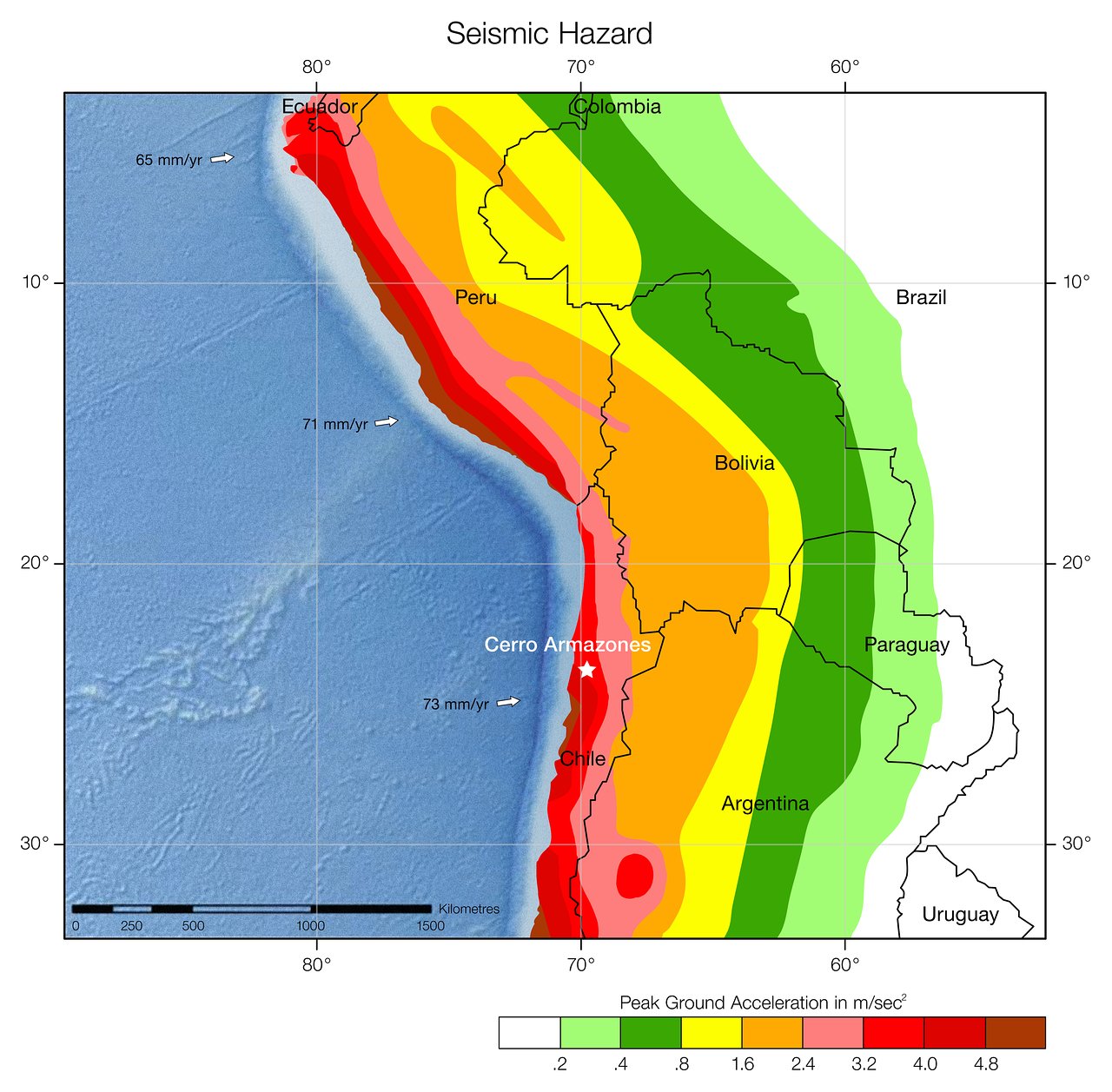 Seismic hazard is expressed as the peak ground acceleration (on firm rock in metres per second squared) that is expected to be exceeded in a 50 year period with a probability of 10%. Cerro Armazones, the site of the ELT, is marked.
Credit: US Geological Survey/ESO

A: Earthquakes are sudden unpredictable movements of the ground due to the motions of Earth’s tectonic plates. They range in energy from tiny tremors to extremely large shocks, so strong that people can’t stand upright and even well-designed buildings are destroyed. Unfortunately, Chile is right at the intersection of two plates: the Nazca plate under the Pacific Ocean is being subducted under the South American continent. So earthquakes are common — Chile experiences on average two earthquakes above a magnitude of 1.5 every 24 hours, with a total of 677 in the past year.

Since ESO has decided to place its unique scientific facilities in this dangerous region due to its world-class night sky, adequate protection needs to be provided.

Q: Why is it so important to protect ESO’s telescopes from earthquakes?

A: Telescopes are composed of an intricate system of fragile components, fine-tuned to observe the Universe with incredible sensitivity and precision. Their optical mirrors and lenses are made from fragile glass ceramics such as Zerodur®, and any significant damage would take a telescope out of operation for a long time. Earthquakes, therefore, pose a great threat. Telescopes need to continue observing even after earthquake events with minimum loss of observing time and even inspections must be minimised, as time on these large science facilities is expensive.

As we build the Extremely Large Telescope (ELT), it is of utmost importance to consider the seismic risk in all design aspects of the telescope. One specific challenge is posed by the gaps between the 798 segments that make up the primary mirror. For observing reasons, these gaps must be as small as possible — but the mirrors must still be separated, as any contact between them during an earthquake would be devastating. The starkly beautiful landscape in which ESO’s Paranal Observatory and the future ELT find themselves.
Credit: ESO/G. Hüdepohl (atacamaphoto.com)

Q: Earthquakes are not a new problem in Chile. How has ESO dealt with them in the past?

A: ESO has previously designed efficient systems to help protect our telescopes from seismic activity. For example, ESO’s Very Large Telescope at the Paranal Observatory has a complex mechanical system that is automatically activated when it experiences a strong earthquake of magnitude 7 or higher. There are a series of clamps around the edges of the mirror, which can — at a moment's notice — lift the entire 23-tonne mirror off the actuators and secure it to the telescope’s support structure.

Over the past decades, Paranal has faced thousands of small seismic events and a few large earthquakes

Interestingly, these mirrors are so expensive that they couldn’t be tested under real seismic conditions — so in the 1990s, ESO used the most advanced computer modelling and simulation tools of the time to investigate the effect of seismic shocks on delicate equipment. This allowed structures to be reinforced where necessary, or for dedicated protection systems similar to airbags to be installed. The metallic structures of the classical telescopes are also built on strong foundations that are anchored directly to solid rock, so the structure will move with the rock and not deform.

Over the past decades, Paranal has faced thousands of small seismic events and a few large earthquakes, including most recently in 2010 and 2014. Every time, the anti-seismic technology has risen to the challenge magnificently and protected the telescope. The earthquake protection “clamps” are best seen when the mirror is taken out for recoating, as is being done here for the primary mirror of the VLT’s Unit Telescope 4.
Credit: ESO/Max Alexander

Q: What different technology must be developed to protect the ELT?

A: The sheer size and weight of the ELT telescope mean we can’t use the same strategy as the VLT. International specialists have been employed to study the seismic risks on the selected location of Cerro Armazones, and long-term measurements have been taken on-site to characterise the ground conditions.

For the past year and a half, we’ve been working with industry on ELT’s detailed design, and the seismic risks are assessed constantly

For the past year and a half, we’ve been working with industry on ELT’s detailed design, and the seismic risks are assessed constantly. The anti-seismic concept of the ELT telescope and dome is based on seismic isolators, which are placed below the telescope between the base layer of the foundation and the rock. In case of an earthquake, the telescope and the dome foundation can slide horizontally on those isolators by as much as 30 centimetres to compensate for the ground movements, minimising shocks to the telescope. Our industry partners have already fully developed and tested this design.

But earthquakes don’t just act horizontally — seismic waves can also move vertically. Our simulations show that we will also need to prevent damage from vertical accelerations. We refer to this as “vertical damping”, and it’s more difficult to find existing industry hardware that meets the ELT telescope requirements — so we’ve had to develop new technology.

Q: Tell us about how you began the process.

A: In parallel with our industry partner, we looked at similar problems we’d dealt with in other telescopes — for example in the Atacama Large Millimeter/submillimeter Array (ALMA), which is made up of 66 high-precision antennas that can be moved around into different configurations. When the 12-m antennas were transported over the unpaved roads at the observatory, they experienced potentially-damaging shocks. So ESO developed a vertical hydraulic damping (shock absorbing) system that was added to the ALMA antenna transporters and tested successfully. 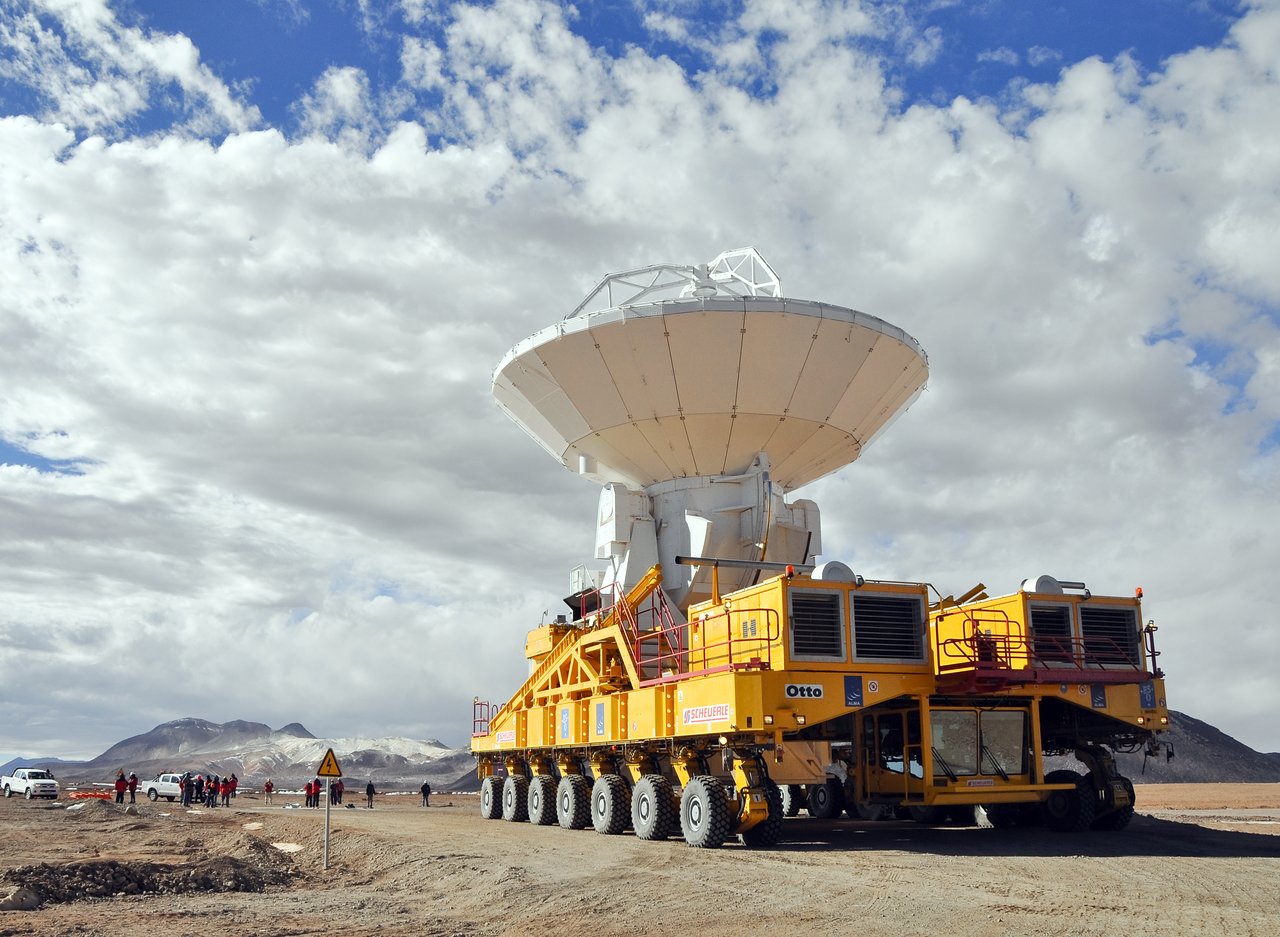 A 12-metre ALMA antenna is transported to the Chajnantor plateau for the first time. Weighing 100 tonnes, the antenna travelled 28 km at an altitude of 5000 m from the Operations Support Facility to its final station.
Credit: ALMA (ESO/NAOJ/NRAO)

Naturally, we studied this damping system to see if it could also be applied to the ELT. The goal of the system is to limit the forces transmitted from the road to the antenna by changing the oil volume in hydraulic cylinders that connect the wheels and transporter frame — essentially, the system absorbs the shock before it reaches the antenna. If configured correctly, it doesn’t need to be linked to an active sensing system. We realised that if we could also develop the ELT seismic damping technology without using an earthquake detection system located at large distance from the ELT site, it would simplify the process and avoid expenses and risks.

In the ALMA project, ESO also applied highly-sophisticated modelling and simulation tools to figure out how the system would behave in advance. Engineers could then optimise the components of the system. For the ELT, the same team of control specialists used similar modelling tools to predict how the mirrors will be affected by a seismic event — even incorporating profiles from earthquakes that have been developed as a design limit for the ELT construction.

This panoramic view of the Chajnantor Plateau shows the site of the Atacama Large Millimeter/submillimeter Array (ALMA), taken from near the peak of Cerro Chico.
Credit: ESO/B. Tafreshi (twanight.org)

Q: Tell us about the design concept you came up with as a result. 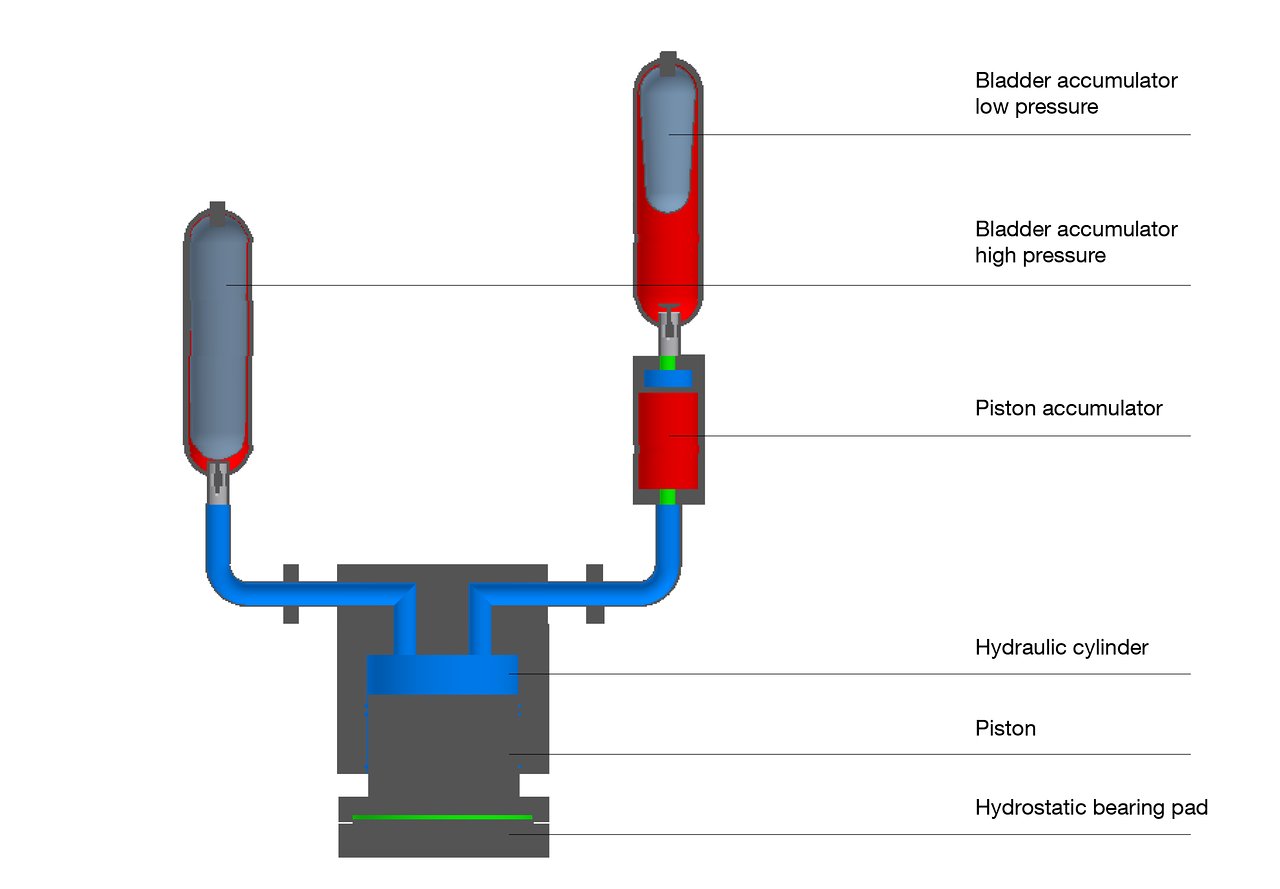 This image shows the concept of the ELT seismic damping system, illustrating the various components that work to protect the telescope from seismic hazards.
Credit: ESO

A: This gets a bit technical, but I’m sure the engineering-minded readers will appreciate it!

Firstly we had to figure out the best location in the ELT design for the vertical isolation dampers. This turned out to be the hydraulic pads of the telescope azimuth hydrostatic oil bearing — the telescope rotates on those pads on circular precision tracks with a thin oil film in between. These pads are kind of the equivalent to the hydraulic wheel supports for the ALMA transporter.

The main element of the damping system is a short (but wide) hydraulic piston, which provides the vertical motion required for the damping effect. The hydraulic piston is installed between the hydrostatic oil bearing pads and the telescope base frame. The cylinder oil volume is closed and the telescope weight rests on it and generates a constant pressure coming from the weight on each pad.

In case of an earthquake, the upwards vertical acceleration from the ground increases the pressure in the cylinder until the oil flows into the accumulator — this happens automatically when the first large seismic wave reaches the telescope. As soon as oil flows into the accumulator, the telescope rests on the gas volume in the accumulator, which is a soft spring and absorbs the seismic shocks. In engineering language, the system’s natural frequency is hugely reduced and the lower system natural frequency protects the structure from dangerous accelerations.After the acceleration event, the oil flows automatically back to the piston and the system is ready to continue operation.

The simulation demonstrated that critical accelerations can be reduced significantly Comparison of seismic accelerations on the primary mirror segments of the telescope with and without the proposed damping system.
Credit: ESO

Q: How different is this to the system used on the ALMA transporters?

Q: Have you run simulations of this system?

A: Using the current telescope design of the ELT, we built a simulation model and equipped it with the proposed dampers. When we exposed the model to seismic events similar to those the ELT might experience, the simulation demonstrated that critical accelerations — for example, the damaging movement of the primary mirror — can be reduced significantly.

Q: What’s the next step for this system?

A: Right now, this design remains just a concept. If it’s pursued further, we’ll need to find an industrial partner with substantial hydraulic construction know-how and the capability to perform large-scale seismic testing. Together, we could develop a reliable technical product and verify the simulation results.

As a final comment, I’d like to acknowledge my co-authors on this project: B. Sedghi, M. Dimmler and M. Mueller. For the engineering-minded readers who would like to find out more, a more detailed technical explanation is in this paper. 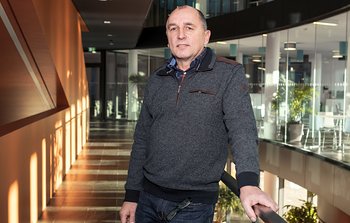 Max Kraus came to ESO as a mechanical engineer for the VLT project 28 years ago. Before joining ESO, he studied mechanical engineering at TUM in Munich and worked in aircraft design. Max enjoys working at ESO because of the large variety of technical challenges, as well as the new working cultures in international projects and the opportunity to put new systems into operation in the spectacular environment of Chile. He lives on a small farm and enjoys woodworking with hand tools.