Stars and Nebulae in the Southern Crown

A Colourful WFI Portrait of a Star-Forming Region

The R Coronae Australis complex of young stars and interstellar gas clouds is one of the nearest star-forming regions, at a distance of approx. 500 light-years from the Sun. It is seen in the southern constellation of that name (The "Southern Crown"). Images of this sky area were recently obtained with the Wide Field Imager (WFI), a 67-million pixel digital camera that is installed at the 2.2-metre MPG/ESO Telescope at ESO's La Silla Observatory.

Some of these exposures have been combined into a magnificent colour image, here reproduced as ESO Press Photo eso0031a. The field shown measures about 4.7 x 4.7 light-years. It displays the central part of the complex, its brightest stars, and the nebulosity that they illuminate. The interstellar clouds that are associated with the complex are visible all across this field and also beyond its borders (on other exposures), due to the obscuring effect of the dust particles that "dim" the light of stars behind these clouds. This effect is particularly noticeable in the lower left corner where very few stars are seen.

The brightness of these two stars and several others in the same field is variable. They belong to the so-called "T Tauri" class, a type that is quite common in star-forming regions. T Tauri stars are in the early stages of stellar evolution and display various observable characteristics of this phase, e.g. emission at visible and infrared wavelengths due to the accretion of matter left over from their formation, as well as X-ray emission.

The nebulosity seen in this picture is mostly due to reflection of the stellar light by small dust particles. The stars in the R Coronae Australis complex do not emit sufficient ultraviolet light to ionize a substantial fraction of the surrounding hydrogen, and thereby cause this gas to glow.

However, some smaller features are also visible (one is seen in the upper left corner of ESO Press Photo eso0031b) which emit light by a different mechanism. These are so-called Herbig-Haro objects, i.e., dense clumps of gas ejected from the immediate vicinity of newly formed stars with velocities of about 200 km/sec. When such clumps ram into the gas, the atoms are heated (excited) and start to shine. See also ESO Press Photo eso9948 of the object HH-34 in Orion.

Other WFI images are available at the WFI Photo Gallery. 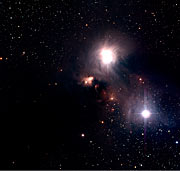 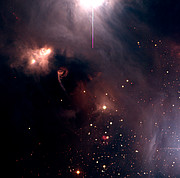