First Images from FORS2 at VLT KUEYEN on Paranal

The first, major astronomical instrument to be installed at the ESO Very Large Telescope (VLT) was FORS1 ( FO cal R educer and S pectrograph) in September 1998. Immediately after being attached to the Cassegrain focus of the first 8.2-m Unit Telescope, ANTU , it produced a series of spectacular images, cf. ESO PR 14/98. Many important observations have since been made with this outstanding facility. Now FORS2, its powerful twin, has been installed at the second VLT Unit Telescope, KUEYEN. It is the fourth major instrument at the VLT after FORS1 , ISAAC and UVES. The FORS2 Commissioning Team that is busy installing and testing this large and complex instrument reports that "First Light" was successfully achieved already on October 29, 1999, only two days after FORS2 was first mounted at the Cassegrain focus. Since then, various observation modes have been carefully tested, including normal and high-resolution imaging, echelle and multi-object spectroscopy, as well as fast photometry with millisecond time resolution. A number of fine images were obtained during this work, some of which are made available with the present Press Release.

FORS1 and FORS2 are the products of one of the most thorough and advanced technological studies ever made of a ground-based astronomical instrument. They have been specifically designed to investigate the faintest and most remote objects in the universe. They are "multi-mode instruments" that may be used in several different observation modes.

FORS2 is largely identical to FORS1 , but there are a number of important differences. For example, it contains a Mask Exchange Unit (MXU) for laser-cut star-plates [1] that may be inserted at the focus, allowing a large number of spectra of different objects, in practice up to about 70, to be taken simultaneously. Highly sophisticated software assigns slits to individual objects in an optimal way, ensuring a great degree of observing efficiency. Instead of the polarimetry optics found in FORS1 , FORS2 has new grisms that allow the use of higher spectral resolutions.

The FORS project was carried out under ESO contract by a consortium of three German astronomical institutes, the Heidelberg State Observatory and the University Observatories of Göttingen and Munich. The participating institutes have invested a total of about 180 man-years of work in this unique programme.

The photos below demonstrate some of the impressive possibilities with this new instrument. They are based on observations with the FORS2 standard resolution collimator (field size 6.8 x 6.8 armin = 2048 x 2048 pixels; 1 pixel = 0.20 arcsec). In addition, observations of the Crab pulsar demonstrate a new observing mode, high-speed photometry.

eso9948b shows a three-colour composite of the young object Herbig-Haro 34 (HH-34) , now in the protostar stage of evolution. It is based on CCD frames obtained with the FORS2 instrument in imaging mode, on November 2 and 6, 1999.

This object has a remarkable, very complicated appearance that includes two opposite jets that ram into the surrounding interstellar matter. This structure is produced by a machine-gun-like blast of "bullets" of dense gas ejected from the star at high velocities (approaching 250 km/sec). This seems to indicate that the star experiences episodic "outbursts" when large chunks of material fall onto it from a surrounding disk.

HH-34 is located at a distance of approx. 1,500 light-years, near the famous Orion Nebula , one of the most productive star birth regions. Note also the enigmatic "waterfall" to the upper left, a feature that is still unexplained.

eso9948c is an enlargement of a smaller area around the central object.

eso9948d shows a three-colour composite of the N 70 nebula. It is a "Super Bubble" in the Large Magellanic Cloud (LMC) , a satellite galaxy to the Milky Way system, located in the southern sky at a distance of about 160,000 light-years. This photo is based on CCD frames obtained with the FORS2 instrument in imaging mode in the morning of November 5, 1999.

N 70 is a luminous bubble of interstellar gas, measuring about 300 light-years in diameter. It was created by winds from hot, massive stars and supernova explosions and the interior is filled with tenuous, hot expanding gas. An object like N70 provides astronomers with an excellent opportunity to explore the connection between the lifecycles of stars and the evolution of galaxies. Very massive stars profoundly affect their environment. They stir and mix the interstellar clouds of gas and dust, and they leave their mark in the compositions and locations of future generations of stars and star systems.

eso9948e is an enlargement of a smaller area of this nebula.

The Crab Nebula in Taurus

eso9948f shows a three colour composite of the well-known Crab Nebula (also known as "Messier 1"), as observed with the FORS2 instrument in imaging mode in the morning of November 10, 1999. It is the remnant of a supernova explosion at a distance of about 6,000 light-years, observed almost 1000 years ago, in the year 1054. It contains a neutron star near its center that spins 30 times per second around its axis (see below). eso9948g is an enlargement of a smaller area. More information on the Crab Nebula and its pulsar is available on the web, e.g. at a dedicated website for Messier objects.

In this picture, the green light is predominantly produced by hydrogen emission from material ejected by the star that exploded. The blue light is predominantly emitted by very high-energy ("relativistic") electrons that spiral in a large-scale magnetic field (so-called syncrotron emission ). It is believed that these electrons are continuously accelerated and ejected by the rapidly spinning neutron star at the centre of the nebula and which is the remnant core of the exploded star. This pulsar has been identified with the lower/right of the two close stars near the geometric center of the nebula, immediately left of the small arc-like feature, best seen in eso9948g.

In combination with the large light collecting power of the VLT Unit Telescopes, the high time resolution (25 nsec = 0.000000025 sec) of the ESO-developed FIERA CCD-detector controller opens a new observing window for celestial objects that undergo light intensity variations on very short time scales. A first implementation of this type of observing mode was tested with FORS2 during the first commissioning phase, by means of one of the most fascinating astronomical objects, the rapidly spinning neutron star in the Crab Nebula . It is also known as the Crab pulsar and is an exceedingly dense object that represents an extreme state of matter - it weighs as much as the Sun, but measures only about 30 km across.

The result presented here was obtained in the so-called trailing mode , during which one of the rectangular openings of the Multi-Object Spectroscopy (MOS) assembly within FORS2 is placed in front of the lower end of the field. In this way, the entire surface of the CCD is covered, except the opening in which the object under investigation is positioned. By rotating this opening, some neighbouring objects (e.g. stars for alignment) may be observed simultaneously. As soon as the shutter is opened, the charges on the chip are progressively shifted upwards, one pixel at a time, until those first collected in the bottom row behind the opening have reached the top row. Then the entire CCD is read out and the digital data with the full image is stored in the computer. In this way, successive images (or spectra) of the object are recorded in the same frame, displaying the intensity variation with time during the exposure.

For this observation, the total exposure lasted 2.5 seconds. During this time interval the image of the pulsar (and those of some neighbouring stars) were shifted 2048 times over the 2048 rows of the CCD. Each individual exposure therefore lasted exactly 1.2 msec (0.0012 sec), corresponding to a nominal time-resolution of 2.4 msec (2 pixels). Faster or slower time resolutions are possible by increasing or decreasing the shift and read-out rate [2].

In eso9948h, the continuous lines in the top and bottom half are produced by normal stars of constant brightness, while the series of dots represents the individual pulses of the Crab pulsar, one every 33 milliseconds (i.e. the neutron star rotates around its axis 30 times per second). It is also obvious that these dots are alternatively brighter and fainter: they mirror the double-peaked profile of the light pulses, as shown in eso9948l. In this diagramme, the time increases along the abscissa axis (1 pixel = 1.2 msec) and the momentary intensity (uncalibrated) is along the ordinate axis. One full revolution of the neutron star corresponds to the distance from one high peak to the next, and the diagramme therefore covers six consecutive revolutions (about 200 milliseconds).

Following thorough testing, this new observing mode will allow to investigate the brightness variations of this and many other objects in great detail in order to gain new and fundamental insights in the physical mechanisms that produce the radiation pulses. In addition, it is foreseen to do high time resolution spectroscopy of rapidly varying phenomena. Pushing it to the limits with an 8.2-m telescope like KUEYEN will be a real challenge to the observers that will most certainly lead to great and exciting research projects in various fields of modern astrophysics.

[1] The masks are produced by the Mask Manufacturing Unit (MMU) built by the VIRMOS Consortium for the VIMOS and NIRMOS instruments that will be installed at the VLT MELIPAL and YEPUN telescopes, respectively.

[2] The time resolution achieved during the present test was limited by the maximum charge transfer rate of this particular CCD chip; in the future, FORS2 may be equipped with a new chip with a rate that is up to 20 times faster.

Caption to eso9944a: This digital photo shows the twin instruments, FORS2 at KUEYEN (in the foreground) and FORS1 at ANTU, seen in the background through the open ventilation doors in the two telescope enclosures. Although they look alike, the two instruments have specific functions, as described in the text.

Technical information: eso9948b is based on a composite of three images taken through three different filters: B (wavelength 429 nm; Full-Width-Half-Maximum (FWHM) 88 nm; exposure time 10 min; here rendered as blue), H-alpha (centered on the hydrogen emission line at wavelength 656 nm; FWHM 6 nm; 30 min; green) and S II (centrered at the emission lines of inonized sulphur at wavelength 673 nm; FWHM 6 nm; 30 min; red) during a period of 0.8 arcsec seeing. The field shown measures 6.8 x 6.8 arcmin and the images were recorded in frames of 2048 x 2048 pixels, each measuring 0.2 arcsec. The Full Resolution version shows the original pixels. North is up; East is left.

Technical information: The frame shown in eso9948h was obtained during a total exposure time of 2.5 sec without any optical filtre. During this time, the charges on the CCD were shifted over 2048 rows; each row was therefore exposed during 1.2 msec. The bright continuous line comes from the star next to the pulsar; the orientation was such that the "observation slit" was placed over two neighbouring stars. Preliminary data reduction: 11 pixels were added across the pulsar image to increase the signal-to-noise ratio and the background light from the Crab Nebula was subtracted for the same reason. Division by a brighter star (also background-subtracted, but not shown in the image) helped to reduce the influence of the Earth's atmosphere.

PR Image eso9948a
FORS1 and FORS2 at ANTU and KUEYEN 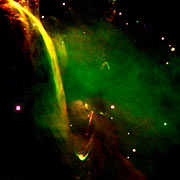 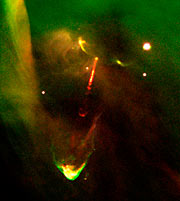 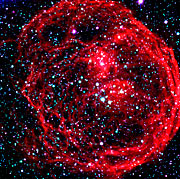 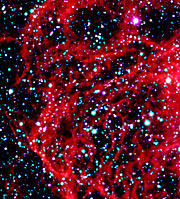 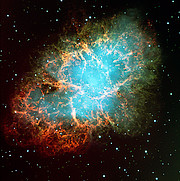 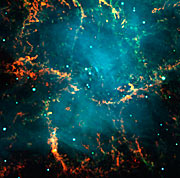 PR Image eso9948g
Centre of the Crab Nebula in Taurus

PR Image eso9948i
Light curve of Crab Pulsar
Send us your comments!
Subscribe to receive news from ESO in your language
Accelerated by CDN77
Terms & Conditions