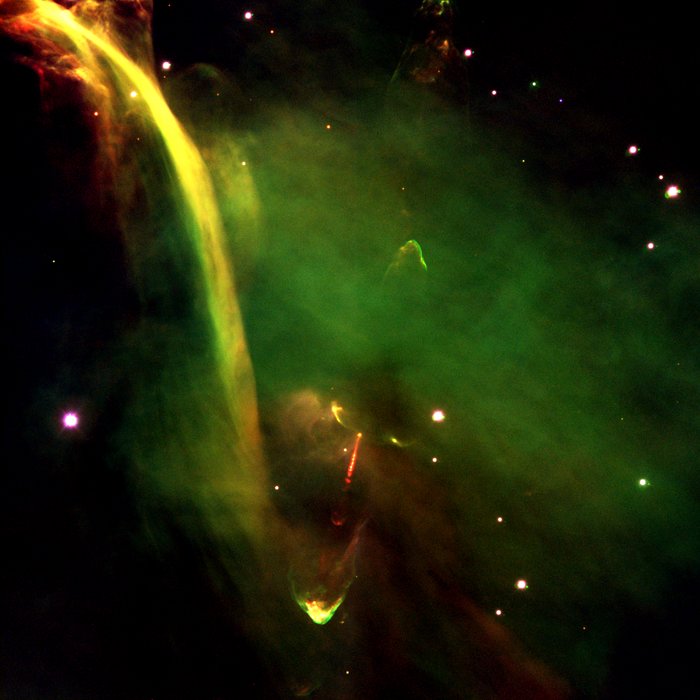 Three-colour composite of the young object Herbig-Haro 34 (HH-34), now in the protostar stage of evolution. It is based on CCD frames obtained with the FORS2 instrument in imaging mode, on November 2 and 6, 1999.

This object has a remarkable, very complicated appearance that includes two opposite jets that ram into the surrounding interstellar matter. This structure is produced by a machine-gun-like blast of "bullets" of dense gas ejected from the star at high velocities (approaching 250 km/sec). This seems to indicate that the star experiences episodic "outbursts" when large chunks of material fall onto it from a surrounding disc.

HH-34 is located at a distance of approx. 1,500 light-years, near the famous Orion Nebula, one of the most productive star birth regions. Note also the enigmatic "waterfall" to the upper left, a feature that is still unexplained.

The composite of three images was taken through three different filters : B (wavelength 429 nm; Full-Width-Half-Maximum (FWHM) 88 nm; exposure time 10 min; here rendered as blue), H-alpha (centered on the hydrogen emission line at wavelength 656 nm; FWHM 6 nm; 30 min; green) and S II (centrered at the emission lines of inonized sulphur at wavelength 673 nm; FWHM 6 nm; 30 min; red) during a period of 0.8 arcsec seeing. The field shown measures 6.8 x 6.8 arcmin and the images were recorded in frames of 2048 x 2048 pixels, each measuring 0.2 arcsec. North is up; East is left.