Multiple Eyes for the VLT

The ESO Very Large Telescope (VLT) at the Paranal Observatory is being equipped with many state-of-the-art astronomical instruments that will allow observations in a large number of different modes and wavebands [1]. Soon to come is the Fibre Large Array Multi-Element Spectrograph (FLAMES) , a project co-ordinated by ESO. It incorporates several complex components, now being constructed at various research institutions in Europe and Australia.

One of these, a true technological feat, is a unique system of 15 deployable fibre bundles, the so-called Integral Field Units (IFUs) . They can be accurately positioned within a sky field-of-view measuring no less that 25 arcmin in diameter, i.e., almost as large as the full Moon . Each of the IFUs looks like an insect's eye and images a small sky area (3 x 2 arcsec 2 ) with a multiple microlens. From each IFU, 20 narrow light beams are sent via optical fibres to an advanced spectrograph. All 300 spectra are recorded simultaneously by a sensitive digital camera.

A major advantage of this technique is that, contrary usual spectroscopic observations in which spectral information is obtained along a (one-dimensional) line on the sky, it now allows (two-dimensional) area spectroscopy . This will permit extremely efficient spectral observations of many celestial objects, including faint galaxies, providing detailed information about their internal structure and motions. Such studies will have an important impact on our understanding, e.g., of the early evolution of galaxies , the main building blocks in the Universe.

The IFUs have been developed by a team of astronomers and engineers [2] at the Observatoire de Paris-Meudon. All IFU components are now at the ESO Headquarters in Garching (Germany) where they are being checked and integrated into the instrument [3].

The FLAMES instrument and its many parts

But this is far from the last. Work is now underway at several European and overseas research institutes to complete the many other large astronomical instruments planned for the VLT. Over the next years, these new facilities will enter into operation one by one, further enhancing the capabilities of this true flagship of European science.

One of these instruments is the Fibre Large Array Multi-Element Spectrograph (FLAMES) , to be installed at the 8.2-m VLT KUEYEN Unit Telescope. It will be able to observe the spectra of a large number of individual, faint objects (or small sky areas) simultaneously and incorporates several highly complex components, e.g.,

Work at the FLAMES facility will be supported by specialized data reduction software developed by Observatoire de Genève-Lausanne in collaboration withObservatoire de Paris-Meudon , and specialized observing software developed at ESO . There will also be a fibre link to the UVES high-dispersion spectrograph and there are plans for incorporating an intermediate resolution IR spectrograph in the future; the ITAL-FLAMES consortium is now preparing the associated instrument control and data reduction software packages.

When it enters into operation later this year [3], GIRAFFE will become the most efficient instrument of its kind available at the world's large optical/infrared telescopes. It will be especially suited for the study of the dynamical properties of distant galaxies - their motion in space, as well as the internal motions of their stars and gas clouds. Indeed, observations of the velocity fields in a large variety of galaxies in the early Universe (when its age was only one third to one half of its current age) will be essential for a better understanding of those major building blocks of the Universe.

This is first of all due to the unique system of 15 deployable fibre bundles, the Integral Field Units (IFUs), that can be accurately positioned within a field-of-view measuring no less than 25 arcmin across, cf. ESO Press Photo eso0203 . Each IFU is a microscopic, state-of-the-art two-dimensional lens array with an aperture of 3 x 2 arcsec 2 on the sky. It contains twenty micro-lenses coupled with optical fibres leading the light recorded at each point in the field to the entry slit of the spectrograph, cf. ESO Press Photo eso0203 .

A great advantage of this technique is that, contrary to usual spectroscopic observations in which spectral information is obtained along a (one-dimensional) line on the sky, it now allows (two-dimensional) area spectroscopy . It is therefore possible to obtain spectra of larger areas of a celestial object simultaneously, and not just along one particular diameter.

With 15 IFUs at their disposal, the astronomers will be able to observe many galaxies at the same time - this will represent a tremendous gain of efficiency with many more astrophysical data collected within the available observation time!

ESO Press Photo eso0203 shows the mechanical design of the entrance of one IFU. An array of 20 square microlenses, each measuring 1.8 x 1.8 mm 2 is used to concentrate the light in the corresponding, small sky field onto a prism that passes the light on to 20 fibres. These are inserted and cemented into a mechanical holder and the entire assembly is then mounted in an IFU "button" that will be positioned in the focal plane by the OzPoz Positioner.

A magnet is incorporated at the base of the button to ensure a stable position (a firm hold) on the focal plate during the observation. The optical cementing is ensured with an UV curing and the fibre bundle is cemented into the button with an epoxy glue in order to ensure excellent stiffness of the complete assembly. The external diameter of the button is about 6 mm, corresponding to about 11 arcsec on the sky, allowing quite close positioning of the buttons on the focal plate.

An example of astronomical observations with IFUs

During the astronomical observation with the IFUs, the spectrograph slit receives light from 15 sky areas simultaneously, each with 21 fibres (20 from the IFU and 1 that collects the light from the night sky in an adjacent sky field) or 22 fibres (with the addition of 1 fibre with light from a calibration lamp). Altogether, about 300 spectra are recorded simultaneously.

By means of such observations, the astronomers can perform many different studies, e.g., of the dynamics of star clusters and motions of stars and interstellar clouds in galaxies.

ESO Press Photo eso0203 provides an example of a computer simulation of a resulting diagramme in which the internal rotation of a distant spiral galaxy is clearly visible. Red and yellow areas have positive velocities that are approaching while the blue areas are receding). Of special interest will be the study of the often violent motions when two or more galaxies interact gravitationally.

[1] This is a joint Press Release of ESO and the Observatoire de Paris (cf. http://www.obspm.fr/actual/nouvelle/jan02/flames.shtml).

[3] It is expected to ship the various components of the FLAMES instrument to the VLT Observatory at Paranal (Chile) during the next month. "First Light" is scheduled to take place some weeks thereafter, following installation at the telescope and extensive system tests. ESO will issue another Press Release with more details on that occasion.

PR Image eso0203c
An illustration of how the IFUs function 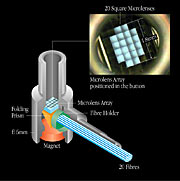 PR Image eso0203e
Observed velocity field in a galaxy (simulation)
Send us your comments!
Subscribe to receive news from ESO in your language
Accelerated by CDN77
Terms & Conditions