VLT Image of a Unique Swarm of Stars, 47 Tuc

The Southern constellation Tucana (the Toucan) is probably best known as the home of the Small Magellanic Cloud, one of the satellite galaxies of the Milky Way. But Tucana also hosts another famous object that shines thousands of lights, like a magnificent, oversized diamond in the sky: the globular cluster 47 Tucanae. More popularly known as 47 Tuc, it is surpassed in size and brightness by only one other globular cluster, Omega Centauri.

Globular clusters are gigantic families of stars, comprising several tens of thousands of stars, all thought to be born at the same time from the same cloud of gas [1]. As such, they constitute unique laboratories for the study of how stars evolve and interact. This is even more so because they are located at the same distance, so the brightness of different types of stars, at different stages in their evolution can be directly compared.

The stars in globular clusters are held together by their mutual gravity which gives them their spherical shape, hence their name. Globular clusters are thought to be among the oldest objects in our Milky Way galaxy, and contain therefore mostly old, low-mass stars

47 Tucanae is an impressive globular cluster that is visible with the unaided eye from the southern hemisphere. It was discovered in 1751 by the French astronomer Nicholas Louis de Lacaille who cataloged it in his list of southern nebulous objects. Located about 16 000 light years away, it has a total mass of about 1 million times the mass of the Sun and is 120 light years across, making it appear on the sky as big as the full moon.

The colour image of 47 Tucanae presented here was taken with FORS1 on ESO's Very Large Telescope in 2001. The image covers only the densest, very central part of the cluster. The globular cluster extends in reality four times further away! As can be seen however, the density of stars rapidly drops off when moving away from the centre. The red giants, stars that have used up all the hydrogen in their core and have increased in size, are especially easy to pick out.

47 Tuc is so dense that stars are less than a tenth of a light year apart, which is about the size of the Solar System. By comparison, the closest star to our Sun, Proxima Centauri, is four light years away. This high density causes many stars to 'bump' into each other, some getting 'married' in the process, or some stars in binary systems exchanging companions. These dynamic processes are the origin of many exotic objects, to be found in the cluster.

Thus, 47 Tuc contains at least twenty millisecond pulsars, i.e. neutron stars [2] rotating extremely rapidly around their axis, a few hundreds to one thousand times a second. Such peculiar objects are generally thought to have a companion from which they receive matter.

The Hubble Space Telescope recently also looked at 47 Tuc to study planets orbiting very close to their parent stars. This experiment showed that such 'hot Jupiters' must be much less common in 47 Tucanae than around stars in the Sun's neighbourhood. This may tell us either that the dense cluster environment is unhealthy for even such close planets, or that planet formation is a different matter today than it was very early in our Galaxy's history.

[1]: There are possible exceptions however. Omega Centauri for example harbours two different populations of stars, which may suggest they formed at different times (see ESO 07/05).

[2]: Neutron stars are among the most extreme objects in the Universe. They are formed when a massive star dies in a 'supernova explosion'. During this dramatic event, the core of the star suddenly collapses under its own gravity and the outer parts are violently ejected into surrounding space. A neutron star is like one big atom with a diameter of 10-20 kilometres, and has a mass about the same as the Sun. Thus, a pinhead of neutron star material (1 millimetre across) has a mass almost 1 million tons, or about as much as the largest oil carrier ever built, fully loaded.

Technical information: ESO Press Photo eso0620 is based on data obtained with FORS1 on Kueyen, UT2 of the Very Large Telescope. The image, 7 arcmin wide, covers the central core of the 30 arcmin large globular cluster. The observations were taken in three different filters: U, R, and a narrow-band filter centred around 485 nm, for a total exposure time of less than 5 minutes. The data were extracted from the ESO Science Archive and processed by Rubina Kotak (ESO) and the final image processing was done by Henri Boffin (ESO). North is up and East is to the left. 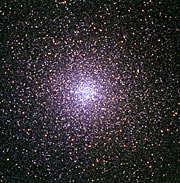 PR Image eso0620a
The globular cluster 47 Tuc
Send us your comments!
Subscribe to receive news from ESO in your language
Accelerated by CDN77
Terms & Conditions