SEPIA (Swedish ESO PI receiver for Apex): The first of the new APEX facility receivers has been successfully installed at the telescope in August 2018. This new band 9 facility receiver for SEPIA records both sidebands simultaneously, with very good sideband rejection at the level of >15 dB at all frequencies (>20 dB in most cases). This new feature duplicates the frequency coverage per tuning, adding flexibility to the design of spectral setups covering multiple lines, and reduces the noise level compared to the old double sideband receiver that was used from 2016 to 2017.

An additional improvement is the extension of the frequency range, which now allows to reach down to on-sky frequencies of 581 GHz, and up to 726 GHz (RF frequencies at the respective edges of the 4-8 GHz IF band). This range extends well beyond the previous one (600 to 722 GHz). Note that the atmospheric transmission in this extended frequency range requires the very best PWV conditions.

To test these new capabilities with real scientific observations, all APEX partners are inviting short science verification (SV) proposals (nominally a few hours, with a maximum of 5 hours). A joint science verification campaign will then be executed between all APEX partners in October 2018. Targets should be selected to be observable at night or during the morning (i.e. from RA~22h to RA~13h), and easily accessible from APEX (i.e. DEC<+10).

Proposals for SV observations are due on Friday 28 September 12:00 CEST. All proposals should be submitted as a single PDF file and sent to apex-garching@eso.org with "SEPIA Science Verification Proposal" in the subject line.

Note that the data for SV proposals will be released as soon as they have been verified by the instrument team. There will be no proprietary period for the PIs. Users who would like to execute larger proposals or have their results protected by a proprietary period are encouraged to submit proposals as part of the regular ESO P103 call for proposals due on 27 September. 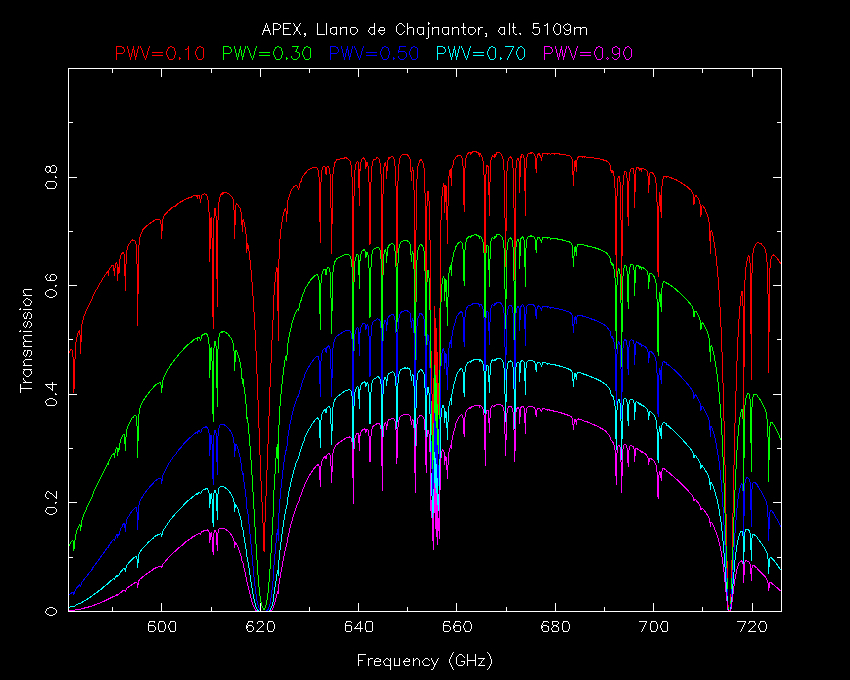 The SEPIA band 9 receiver is an identifical copy of the ALMA band 9 receiver. An extensive description is given here. The receiver is a double sideband (DSB) receiver, which covers the RF frequency range from 600 to 722 GHz. Only 4 GHz bandwidth of one of the sidebands is recorded, but in dual polarization. The receiver is connected to the XFFTS backend which provides a fixed number of 65536 channels per 2.5 GHz sub band. At 660 GHz, this corresponds to a spectral resolution of 0.0173 km/s. The offered observing patters are On-Off observations, Raster maps, and On-the-fly (OTF) mapping. The data will be taken in either beam-switching or position switching mode. At 660 GHz, the beam size is 9.5 arcsec. An important constraint for observations at band 9 is the atmospheric transparency (see below). Generally, PWV<0.7mm conditions are required, though at some frequencies, even better conditions will be required. Note that these good to excellent conditions statistically occur 40% of the time.

The purpose of the Science Verification observations for SEPIA Band 9 is to execute programmes testing a various number of science cases for which the instrument was designed. Those programmes will be chosen also to test the various modes of operation.

We expect that up to 20 hours will be available in total for Science Verification of SEPIA Band 9. We envisage approving for execution proposals ranging in total length from 0.5 to 4 hours.

Proposals received after this time will not be considered.

The online execution time estimator must be used for both SV and normal proposals. It can be found here:

In order to use the estimator, first use the "Heterodyne receiver" menu to select "SEPIA".

SV data will be reviewed for "science quality". Once they have passed that review they will be placed in the archive and will be released immediately.

There will be no proprietary time for those data. I.e. in case your proposal is accepted and executed the data will become freely available as soon as they are released.

We will notify all applicants as to whether their proposal was accepted. There is no guarantee that accepted SV will be executed. We will do our best to send notifications if/when a proposal has been executed, but we cannot guarantee to do this in real time.

We may have to change execution time or observing strategy of individual projects during the SV execution campaign. As far as possible we will try to stay in contact with the proposers on those issues, but this may not always be possible.

SV and normal ESO proposals will all be reviewed for duplications as per usual ESO procedure. In case those are simply "self duplications" (as described in sub-section "No target change" below), then the rules listed in that sub-section will be followed. In case of duplications by another group, standard ESO duplication policies will be strictly followed.

Precise target coordinates must be provided in the proposal template. Change of target will not in general be possible.

You may submit both an SV and a normal proposal for the same target, either for the same or for similar observations. If you do then please take note of the following policies: