One of the movies featured at this year’s Filmfest München, taking place between 25 June and 3 July 2010, is “Nostalgia for the Light” (“Nostalgia de la Luz”). Directed by Patricio Guzmán, the movie is set in Chile, and ESO’s Paranal Observatory is one of the locations featured. Here, at almost 3000 m altitude, astronomers observe the stars with ESO’s Very Large Telescope and make new discoveries about the Universe.

Furthermore, in the same area of the Atacama Desert, the environmental conditions preserve human remains, including mummies, explorers, and also those of people who disappeared during the past dictatorial regime. Here, the movie follows a group of women who are digging through the desert soil in search of their disappeared relatives. 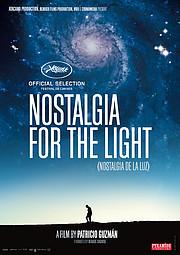 PR Image ann1032a
Nostalgia for the Light
Send us your comments!
Subscribe to receive news from ESO in your language
Accelerated by CDN77
Terms & Conditions