Predicting the Size and Shape of an Asteroid at a Distance

Astronomers have used the ESO Very Large Telescope (VLT), in conjunction with other telescopes, adaptive optics technology and an advanced computer program, to accurately predict the size and shape of an asteroid 200 million km from Earth. As the asteroid, (21) Lutetia, is only 100 km across, the challenging Earth-based observations were equivalent to trying to measure the size and shape of a large baked potato at a distance of about 200 km. Each of the approximately 300 snapshots shows the asteroid as little more than a small blob, but by combining all of them, together with further measurements of the brightness of the asteroid over time, the team were able to reconstruct a three-dimensional model of Lutetia.

Following this, ESA’s Rosetta spacecraft took high-resolution photographs of Lutetia during a fly-by in July 2010. The images show convincingly that the ground-based observations correctly predicted both the size and shape of the asteroid to within a few percent! Having a correct three-dimensional model of Lutetia will be invaluable for the scientists who are interpreting the data from Rosetta. This demonstrates that the combination of large Earth-based telescopes, adaptive optics technology and advanced computer code is an extremely powerful way to study asteroids.

The results, from a team led by Benoit Carry from the Observatoire de Paris, are presented at the annual meeting of the American Astronomical Society’s Division for Planetary Sciences, taking place from 3–8 October 2010 in Pasadena, California, USA. 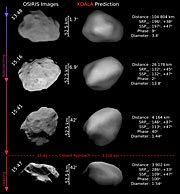 PR Image ann1068a
Predicting the size and shape of an asteroid at a distance
Send us your comments!
Subscribe to receive news from ESO in your language
Accelerated by CDN77
Terms & Conditions