A new study has confirmed that galaxies like the Milky Way form easily. The investigation, carried out by Kambiz Fathi at the Institute of Astronomy of Stockholm University, also shows that Milky-Way-sized galaxies have been the biggest spiral galaxies for at least the last 3.4 billion years of the Universe’s 13.7-billion-year history.

To come to his conclusions, Fathi measured images of 30 000 galaxies, using the facilities of the European Virtual Observatory (EURO-VO) [1]. ESO is a co-leader of the EURO-VO Facility Centre. Virtual Observatories allow astronomers to use the power of the internet and large databases to re-use and combine existing observations from many different telescopes in innovative ways. For each of the 30 000 galaxies, he estimated the number of stars in the parts of galaxies where spiral arms are prominent, using images from the Sloan Digitized Sky Survey telescope [2]. The Sun occupies just such a place in the Milky Way.

Since the 1970s, astronomers have noticed that the number of stars in these unremarkable, middle regions of spiral galaxies is never much bigger than in the Milky Way. This upper limit is known as Freeman’s Law, named after the Australian astronomer Ken Freeman, who first described it. Previously astronomers had checked Freeman’s Law for a few tens of galaxies, but Fathi’s much larger sample has now shown that it applies much more generally, and as far back in time as 3.4 billion years ago [3].

[1] This work made use of Virtual Observatory (VO) tools and services and was supported by the EURO-VO while funded by the European Commission under contract number 212104 (AIDA).

[2] Funding for the SDSS and SDSS-II was provided by the Alfred P. Sloan Foundation, the Participating Institutions, the National Science Foundation, the US Department of Energy, the National Aeronautics and Space Administration, the Japanese Monbukagakusho, the Max-Planck Society, and the Higher Education Funding Council for England. The SDSS was managed by the Astrophysical Research Consortium for the participating institutes.

[3] Since the speed of light is finite, we see distant galaxies as they were when the Universe is younger than it is now. This effect allows astronomers to investigate how the Universe and its galaxies have changed just by looking at objects at very large distances. 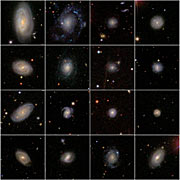 PR Image ann1070a
A sample of galaxies from the Sloan Digitized Sky Survey
Send us your comments!
Subscribe to receive news from ESO in your language
Accelerated by CDN77
Terms & Conditions