Spanish Minister for Science and Innovation Visits Paranal and ALMA

On 1–2 August 2011, the ESO Paranal Observatory in Chile was honoured with a visit from the Spanish Minister for Science and Innovation, Cristina Garmendia Mendizábal.

The distinguished visitor was present when the dome of one of the four 8.2-metre Unit Telescopes of ESO’s Very Large Telescope opened for a night’s observing at Cerro Paranal, the world’s most advanced visible-light observatory.

Minister Garmendia was accompanied by Carlos Martinez Riera, Director General for International Cooperation at the Ministry for Science and Innovation (MICINN), Xavier Barcons, Spanish delegate and Vice-president of the ESO Council,  and Juan Manuel Cabrera, Spanish Ambassador in Chile. The group was hosted at Paranal by the ESO Director General, Tim de Zeeuw, the ESO Representative in Chile, Massimo Tarenghi, and the Director of Operations, Andreas Kaufer.

After the opening of the telescope, Minister Garmendia enjoyed the spectacular sunset over the Pacific Ocean from the VLT platform. Then she visited the VLT control room, from which the four Unit Telescopes and the VLT Interferometer (VLTI) are operated. Here, she took part in the start of observations from the console of one of the VLT Unit Telescopes.

The following day, the group traveled through the Atacama Desert to arrive at ALMA, the Atacama Large Millimeter/submillimeter Array, which is the largest astronomical project in existence.

The ALMA site is located some 50 km east of San Pedro de Atacama in northern Chile, and is in one of the driest places on Earth. There, Minister Garmendia visited the Operations Support Facility (OSF), where ALMA antennas are being assembled and tested.

Then she continued to the 5000-metre-high plateau of Chajnantor, one of the highest astronomical observatory sites on Earth, where Minister Garmendia could see the operations of the ALMA antennas that have been installed so far.

Very recently, the first European antenna reached Chajnantor (see eso1127), bringing the number of antennas on the plateau to 16 — the number specified for ALMA to begin its first science observations, which are planned to start later this year. The Spanish astronomical community is actively participating in the ALMA project through Spain’s membership of ESO. For example, the steel structures of the 25 European antennas are built in northern Spain. 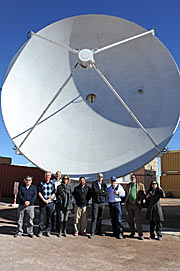 PR Image ann11050b
Spanish Minister for Science and Innovation visits Paranal and ALMA
Send us your comments!
Subscribe to receive news from ESO in your language
Accelerated by CDN77
Terms & Conditions