In 2010, German recording artists Lichtmond released their flagship multimedia album Moonlight, a soundtrack of pop songs and love poems played to a backdrop of 3D fantasy imagery and animations. Recently they have released a follow-up to this work in the form of a new project, Lichtmond 2: Universe of Light.

The band, who reside in Neufahrn, a village close to ESO Headquarters in Garching, Germany, once again pushed the boundaries of visual and audio technologies to the limit, creating an amazing world of 3D animations to accompany advanced (5.1 and 7.1) surround-sound audio. Universe of Light describes a fantasy world in which a second sun is born, followed by the evolution of light on “Earth 2”, a planet much like our own.

ESO’s participation in this project began one year ago in Chile, when legendary British producer Alan Parsons (The Alan Parsons Project/Pink Floyd/The Beatles) was invited for an overnight visit to Paranal (see Stars@ESO announcement 1103). Giorgio Koppehele, one half of Lichtmond, took the opportunity to accompany Parsons on the visit and, after some persuasion, managed to convince him to provide the vocals for the first single from the new album, entitled “Precious Life”.

Koppehele’s visit to Paranal and ALMA inspired him to create a short movie of the site, ESO & ALMA suites, using footage and stunning time-lapse images from the ESO archives set to the soundtrack of Universe of Light. This movie is available on the special box-set edition of the album, together with an interview with Alan Parsons where he talks about music, life and his trip to the ESO observatories.

Lichtmond 2: Universe of Light, released on 28th September 2012, was an instant smash hit. It went straight into the German Top 20 music DVD and Blu-Ray charts at number one, was listed in the top five 3D Blu-Ray bestsellers on Amazon.de, and ranked at #13 in the official German Top 100 longplay charts on its release. 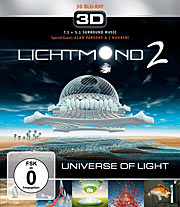 PR Image ann12076a
Cover of Lichtmond 2: Universe of Light Blu Ray release
Send us your comments!
Subscribe to receive news from ESO in your language
Accelerated by CDN77
Terms & Conditions