The European Astronomical Society has awarded the 2013 Tycho Brahe Prize to Massimo Tarenghi, in recognition of his central role in the development of the European Southern Observatory facilities that have resulted in Europeʼs world-leading role in ground-based astronomy.

The Tycho Brahe Prize recognises outstanding use and development of European instruments, and honours ground-breaking discoveries made using such instruments. Tarenghi's work has led to several new paradigm-changing observational techniques and methodologies.

Throughout 35 of ESO's 50-year history, Massimo Tarenghi has played a sequence of pivotal roles in the development of the organisation, up to its current-day status as a large, world-leading multi-facility observatory. Becoming an ESO Staff Member in 1979, he was Project Scientist, and later Project Manager, for the MPG/ESO 2.2-metre telescope erected and operated by ESO on La Silla. This telescope is still in operation and, using the Wide Field Imager, is responsible for many of the survey programs and spectacular images that are so well known to astronomers throughout the world.

Tarenghi was subsequently named Project Manager for the New Technology Telescope (NTT). He and his team implemented the use of active optics with spectacular results right from first light, and the NTT opened a new way forward for telescopes of the future. The use of relatively lightweight, actively-controlled optics on an alt-azimuth mount later became the baseline for the ESO Very Large Telescope project with Tarenghi being appointed Project Manager in 1988. Bringing this huge and complex project to completion required strong and dedicated management. But more than just developing a novel and ground-breaking suite of telescopes, Tarenghi was also instrumental in creating an entire new observatory on Cerro Paranal, and became its first Director.

During the development of the multinational Atacama Large Millimeter/submillimeter Array project Tarenghi held several senior positions, including Interim Director and Interim Project Manager, and in 2003 he was appointed Director, a post that he held until 2008. Appointed ESO Representative in Chile in December 2008, Tarenghi was again able to influence future events by preparing the ground in Chile for the forthcoming site selection decision for the European Extremely Large Telescope, which was eventually made in 2010.

The Tycho Brahe Prize is funded by the Klaus Tschira Stiftung, which was established by the physicist Klaus Tschira in 1995 as a non-profit organization. Its primary objective is to support projects in natural sciences, mathematics, and computer sciences, raising public awareness and appreciation for these fields. 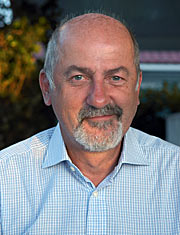