The material around SN 1987A (artist’s impression) 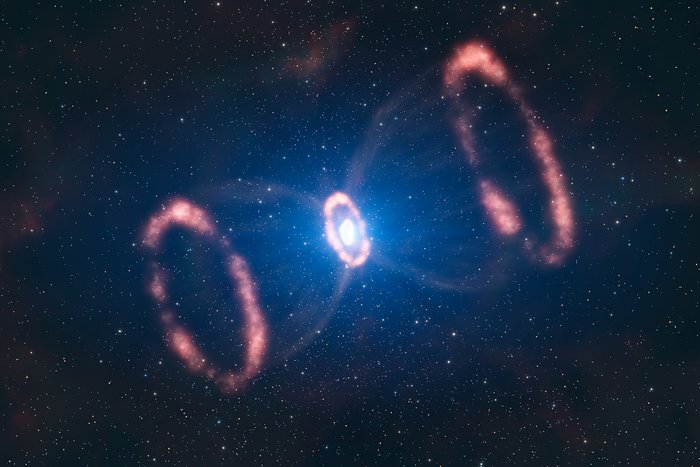 This artist’s impression of the material around a recently exploded star, known as Supernova 1987A (or SN 1987A), is based on observations which have for the first time revealed a three dimensional view of the distribution of the expelled material. The observations were made by astronomers using ESO’s Very Large Telescope. The original blast was not only powerful, according to the new results. It was also more concentrated in one particular direction.This is a strong indication that the supernova must have been very turbulent, supporting the most recent computer models. This image shows the different elements present in SN 1987A: two outer rings, one inner ring and the deformed, innermost expelled material.

Just how a supernova explodes is not very well understood, but the way the star exploded is imprinted on this inner material. The astronomers could deduce that this material was not ejected symmetrically in all directions, but rather seems to have had a preferred direction. Besides, this direction is different to what was expected from the position of the rings.