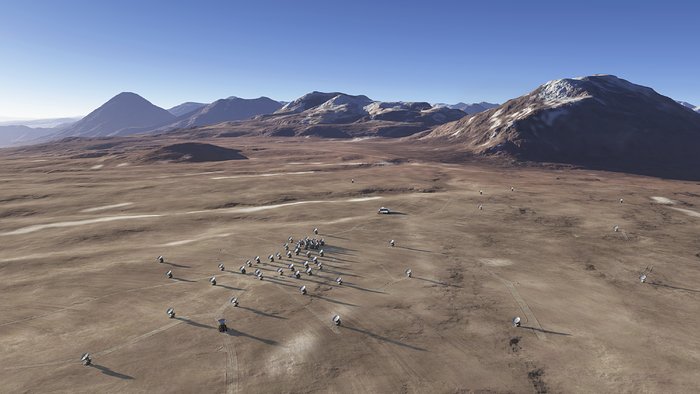 The Atacama Large Millimeter/submillimeter Array (ALMA) is the largest astronomical project in existence. It is a revolutionary astronomical telescope, comprising an array of 66 giant 12-metre and 7-metre diameter antennas observing at millimetre and submillimetre wavelengths. It is being built on the breathtaking location of the Chajnantor plateau, at 5000 metres altitude in the Chilean Andes, and will start scientific observations in 2011.

In this artist’s rendering, the ALMA array is seen on the Chajnantor plateau in an extended configuration. The antennas, which each weigh over 100 tons, can be moved to different positions with custom-built transporter vehicles in order to reconfigure the array.

ALMA is the most powerful telescope for observing the cool Universe — molecular gas and dust as well as the relic radiation of the Big Bang. It will study the building blocks of stars, planetary systems, galaxies and life itself.

ALMA, an international astronomy facility, is a partnership of Europe, North America and East Asia in cooperation with the Republic of Chile. ESO is the European partner in ALMA.