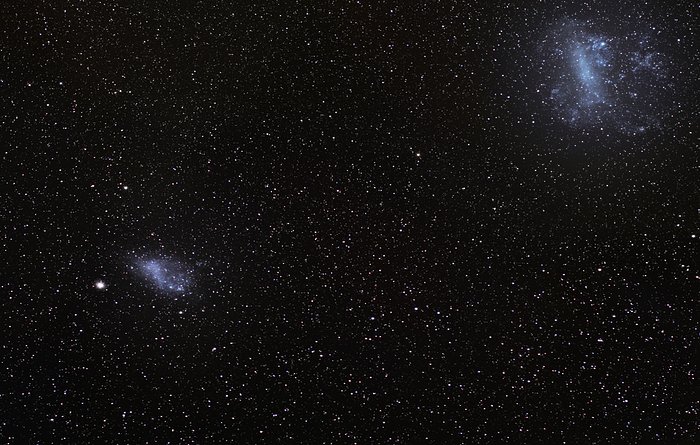 Seen from the southern skies, the Large and Small Magellanic Clouds (the LMC and SMC, respectively) are bright patches in the sky. These two irregular dwarf galaxies, together with our Milky Way Galaxy, belong to the so-called Local Group of galaxies. Astronomers once thought that the two Magellanic Clouds orbited the Milky Way, but recent research suggests this is not the case, and that they are in fact on their first pass by the Milky Way.

The LMC, lying at a distance of 160 000 light-years, and its neighbour the SMC, some 200,000 light-years away, are among the largest distant objects we can observe with the unaided eye. Both galaxies have notable bar features across their central discs, although the very strong tidal forces exerted by the Milky Way have distorted the galaxies considerably. The mutual gravitational pull of the three interacting galaxies has drawn out long streams of neutral hydrogen that interlink the three galaxies.

On 23 February 1987 the LMC hosted a dramatic cosmic explosion when a supernova (SN 1987A) ignited near the Tarantula Nebula. SN 1987A ranks among the brightest and closest events of this kind ever observed in recorded history.

Al Sufi, the Persian astronomer, described the LMC for the first time in his Book of Fixed Stars in AD 964. He called it Al Bakr, describing it as the White Ox of southern Arabia. Referred to in some older books as Nubecula Major and Minor, the Clouds take their modern name from the explorer Ferdinand Magellan, who first recorded their existence on his voyage of circumnavigation in 1519–22, and brought news of them to Europe; although a letter written by Amerigo Vespucci during his third voyage about 1503–4 may refer to them indirectly.