The Coalsack and the Southern Cross 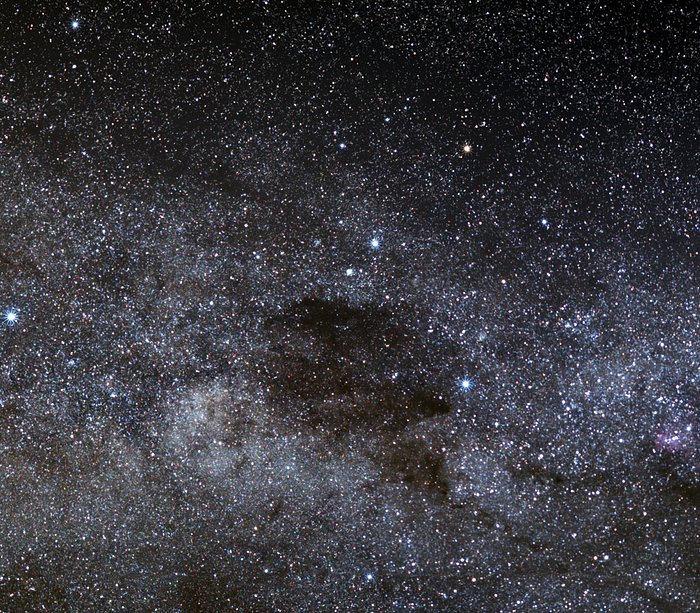 The Coalsack is one of the most prominent dark nebulae visible to the unaided eye. A beautiful sight in the southern sky, the Coalsack casts a dark silhouette against the Milky Way’s bright stripe of stars. The Coalsack is located approximately 600 light-years away from Earth in the southern part of the constellation of Crux (the Southern Cross).

This seemingly starless dark patch is actually an opaque interstellar dust cloud that obscures the light of the background Milky Way stars. Dust grains in the cloud redden the starlight that reaches us by absorbing blue light preferentially, so that the red stars shimmering in the northern and darkest part of the Coalsack appear more crimson than they would in the absence of this dust.

The first European to see this remarkable object was probably the Spanish navigator and explorer Vincente Yanez Pinzon when he sailed to the South American coast in 1499. The Coalsack earned the nickname "Black Magellanic Cloud” in the 16th century, apparently rivalling the prominence of the Large and Small Magellanic Clouds, the two dwarf irregular galaxies that shine brightly in the skies of the Southern Hemisphere. The Incas tell that the god Ataguchu, in a fit of temper, kicked the Milky Way and a fragment flew off, forming the Small Magellanic Cloud where it landed on the sky, and leaving the black mark of the Coalsack behind. Beware of Inca gods in a bad mood!

Another famous sight seen from southern latitudes — though it can creep into view in tropical northern latitudes — is the Southern Cross, or Crux. This cross-shaped constellation has assumed great significance in the cultures of the Southern Hemisphere, even as far back as prehistoric times. So distinctive and evocative is the Southern Cross that the national flags of Australia, Brazil, New Zealand, Papua New Guinea, and Samoa all include a representation of it. The European Southern Observatory (ESO) has also acknowledged the significance of Crux as the foremost constellation of the southern skies, and has proudly incorporated the cross-shaped symbol into the ESO logo. Its Mapudungun name (that is, in the language of the native Chilean Mapuche population), Melipal, was given to the third Unit Telescope of the VLT on Paranal.