Aerial view of the VLT platform 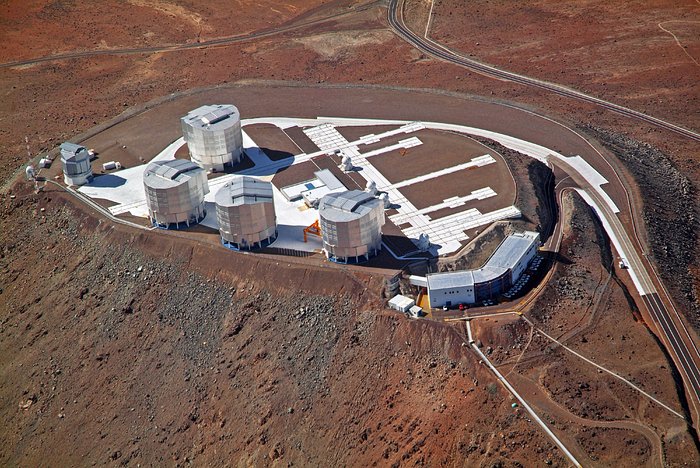 Aerial view of the ESO Very Large Telescope (VLT), atop Cerro Paranal, in the Chilean Atacama Desert. On the low-left side of the platform, the buildings of the four giant 8.2-metre Unit Telescopes (UTs) are clearly distinguishable. The UTs can observe either individually or combined by two or three, using a technique called interferometry. Their position in the platform is the one which allows the maximum number of possible configurations. Aligned on the right of the UTs are the four 1.8-metre Auxiliary Telescopes (ATs), entirely dedicated to interferometric observations. The ATs can be relocated in 30 different observing positions, allowing a huge number of different configurations. On the left corner of the platform is the 2.6-metre VLT Survey Telescope (VST). With a 256 megapixels camera, the VST will have a field of view four times the area of the full Moon, enabling the VST to cover large areas of the sky. On the lower side of the platform is the Control Building, where astronomers operate the telescopes during the night.