In Tarantula territory (a) 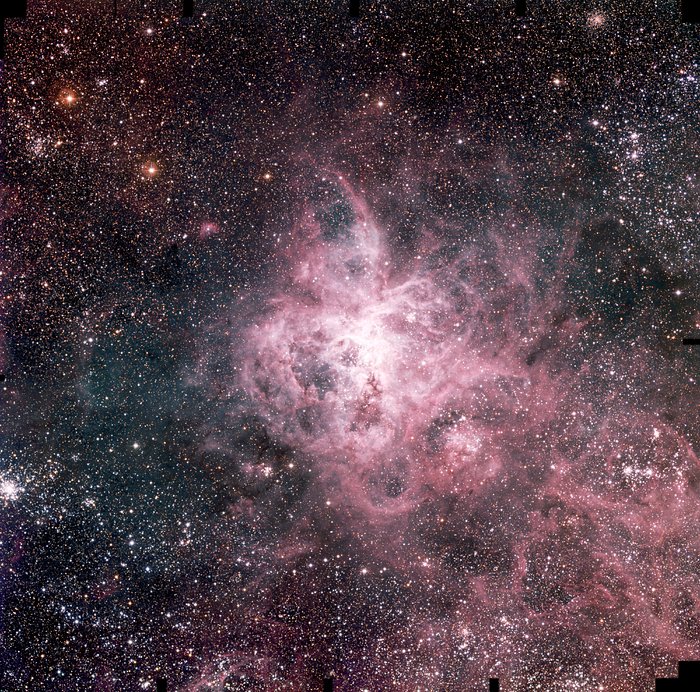 A reproduction of a composite colour image of the Tarantula Nebula in the Large Magellanic Cloud (LMC) and its surroundings. The LMC is a satellite galaxy to our Milky Way system, located in the southern constellation Dorado (the Swordfish) at a distance of approximately 170,000 light-years. The image is based on 15 exposures in the visual part of the spectrum with the Wide Field Imager (WFI) camera on the 2.2-m MPG/ESO telescope at the La Silla Observatory. A number of small areas near the borders were not covered in all three colours and have been left black. Six smaller fields with particular objects from this photo are reproduced as ESO Press Photos eso0216b-g. ESO Press Photo eso0216a was produced from 15 images that were obtained in September 2000 with the Wide-Field-Imager (WFI) at the 2.2-m MPG/ESO telescope. The images were exposed in the B-band (5 x 200 sec; wavelength 456 nm; Full-Width-Half-Maximum (FWHM) 99 nm; here rendered as blue), V-band (5 x 200 sec; 540 nm; 89 nm; green) and R-band (5 x 200 sec; 652 nm; 162 nm; red). The original pixel size is 0.238 arcsec. The photo shows the full field recorded in all three colours. It measures approximately 34 x 34 arcmin 2 ; North is up and East is left. The seeing was about 1.6 arcsec.