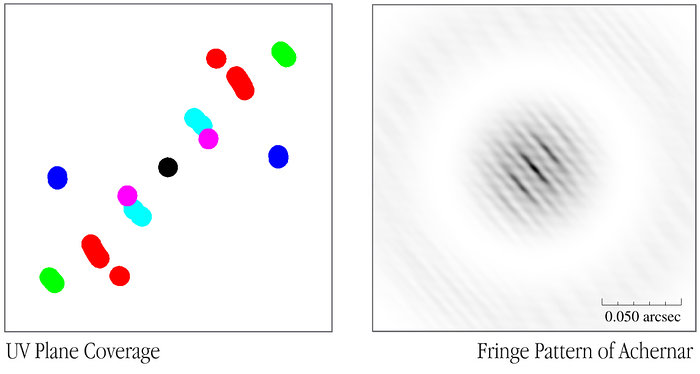 The left panel shows the rather incomplete set of "baselines" used during the present, short interferometric test exposures (in interferometric terminology: the "UV-plane coverage"). Each baseline is represented by two opposite, short arcs, symmetric around the origin (centre) of the diagram. The colour-coded pattern reflects the telescope pairs (ANTU-KUEYEN = magenta, ANTU-MELIPAL = red, ANTU-YEPUN = green, KUEYEN-MELIPAL = cyan, KUEYEN-YEPUN = blue), as seen from the observed object. Due to the limited time available, this distribution is far from uniform and is quite elongated in one direction. To the right is shown the reconstructed, two-dimensional interferometric point-spread function (PSF) of the star Achernar (in "negative" — with most light in the darkest areas). It is the result of subsequent computer processing of the measurements with the different baselines. On the largest scale, the image consists of an inner, round distribution of light, 0.057 arcsec wide, surrounded by an outer, much weaker, broad "ring" and with a "white" zone between these two areas. This is the "Airy disk" for a single 8.2-m telescope at this infrared wavelength (the K-band at 2.2 µm). It represents the maximum resolution (image sharpness) obtainable when observing with a single telescope. As explained in the text, the interferometric "addition" of more telescopes greatly improves that resolution. The width of the individual — slightly S-shaped — lines ("fringes") in the inclined pattern visible in the inner area, about 0.003 arcsec, represents the achieved interferometric resolution in one direction (with an angular diameter of about 0.002 arcsec, the disk of Achernar is not resolved, making it a suitable object for this resolution test). The resolution in the perpendicular direction (along the lines) is evidently less - this is due to the specific (elongated) baseline pattern during these test observations (left panel). The image provides a direct illustration of the 20-fold increase in resolution of the VLTI over a single 8.2-m telescope .