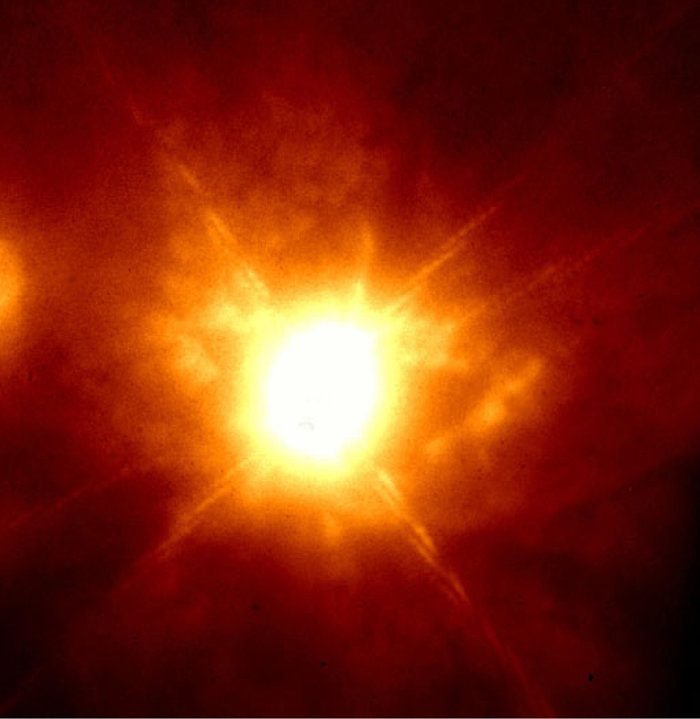 Eta Carinae is one of the heaviest and most luminous stars known. Its mass probably exceeds 100 solar masses, and the star is about 4 million times brighter than the Sun. Such a massive star has a comparatively short lifetime of about 1 million years; when measured in the cosmic timescale, Eta Carinae must have formed quite recently. This star is highly unstable and prone to violent outbursts. These outbursts are caused by the very high radiation pressure at the star's upper layers, which blows significant portions of the matter at the "surface" into space during eruptions that may rage for several years. The last of these outbursts occurred between 1835 and 1855, peaking in 1843. Despite its large distance from Earth of some 7,500 to 10,000 light-years, Eta Carinae briefly became the second brightest star in the sky at that time (with an apparent magnitude -1), surpassed only by Sirius. This image is an infrared narrow K-band image of the massive star Eta Carinae. The image quality is difficult to estimate because the central star saturated the detector, but the clear structure of the diffraction spikes and the size of the smallest features visible in the photo indicate a near-diffraction limited performance. The field measures about 6.5 x 6.5 square arcsec.