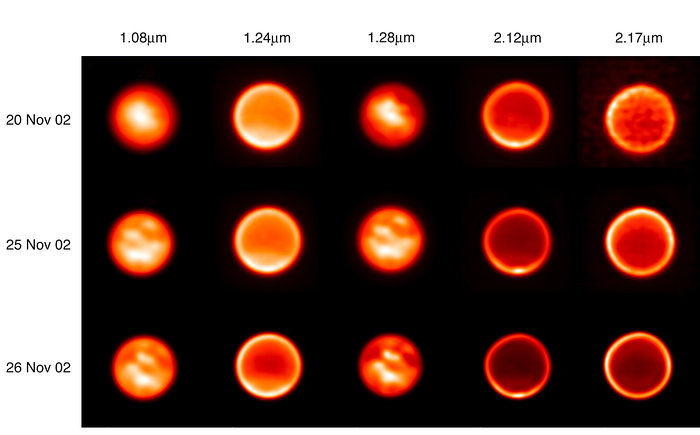 Titan (apparent visual magnitude 8.05, apparent diameter 0.87 arcsec) as observed with the NAOS/CONICA instrument at VLT Yepun (Paranal Observatory, Chile) on November 20, 25 and 26, 2003, between 6.00 UT and 9.00 UT. The median seeing values were 1.1 arcsec and 1.5 arcsec respectively for the 20th and 25th. Deconvoluted ("sharpened") images of Titan are shown through 5 different narrow-band filters - they allow to probe in some detail structures at different altitudes and on the surface. Depending on the filter, the integration time varies from 10 to 100 seconds. While Titan shows its leading hemisphere (i.e. the one observed when Titan moves towards us) on Nov. 20, the trailing side (i.e the one we see when Titan moves away from us in its course around Saturn) - which displays less bright surface features - is observed on the last two dates.