SINFONI observations of the Galactic Centre 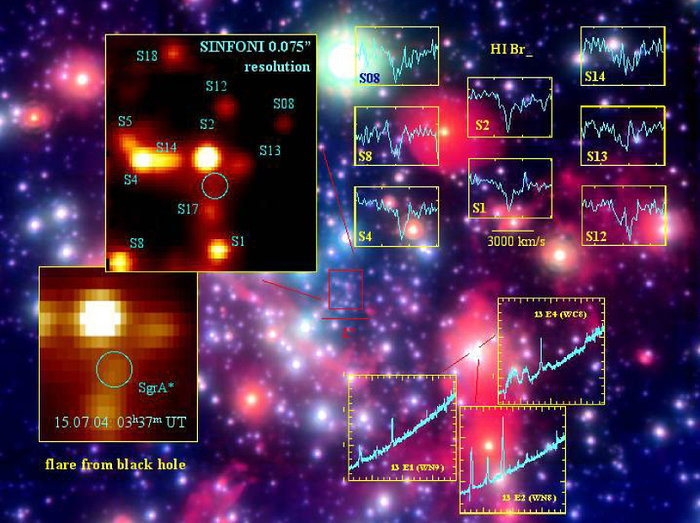 The coloured image (background) shows a three-band composite image (H, K, and L-bands) obtained with the AO imager NACO on the 8.2-m VLT Yepun telescope. On July 15, 2004, the new SINFONI instrument, mounted at the Cassegrain focus of the same telescope, observed the innermost region (the central 1 x 1 arcsec) of the Milky Way Galaxy in the combined H+K band (1.45 - 2.45 µm) during a total of 110 min "on-source". The insert (upper left) shows the immediate neighbourhood of the central black hole as seen with SINFONI. The position of the black hole is marked with a yellow circle. Later in the night (03:37 UT on July 16), a flare from the black hole ocurred (a zoom-in is shown in the insert at the lower left) and the first-ever infrared spectrum of this phenomenon was observed. It was also possible to register for the first time in great detail the near-infrared spectra of young massive stars orbiting the black hole; some of these are shown in the inserts at the upper right; stars are identified by their "S"-designations. The lower right inserts show the spectra of stars in "IRS 13 E", a very compact cluster of very young and massive stars, located about 3.5 arcsec to the south-west of the black hole. The wavefront reference ("guide") star employed for these AO observations is comparably faint (red magnitude approx. 15), and it is located about 20 arcsec away from the field centre. The seeing during these observations was about 0.6 arcsec. The width of the slitlets was 0.025 arcsec.