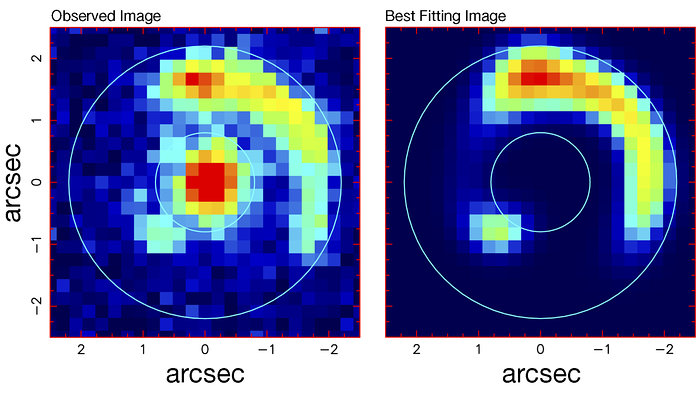 The left image is magnified and centred on the newly discovered Einstein ring. The image quality ("seeing") of the R-band image is exceptional (0.5") and the image reveals the lensing system in stunning details. The central dot is the lens, a quiescent massive galaxy that distort the light emitted by background sources. The large arc surrounding the central lens is a part of the Einstein-ring created by a background source finely aligned with the lens. The reddish colour indicates that the redshift of the system is very large. FORS2 spectroscopy of the lensing system yield a redshift close to 1 for the lens (we see the lens as it was when the universe was half its present size), and a record-breaking redshift z=3.8 for a background source of such brightness, hence we see the object (a star forming galaxy) as it was when the universe was only 12% of its present age. The lensing model indicates that the light of the source is magnified at least 13 times. The right panel shows the reconstructed image based on the model of the lens and the source, showing the ring to extend over 3/4 of a circle.