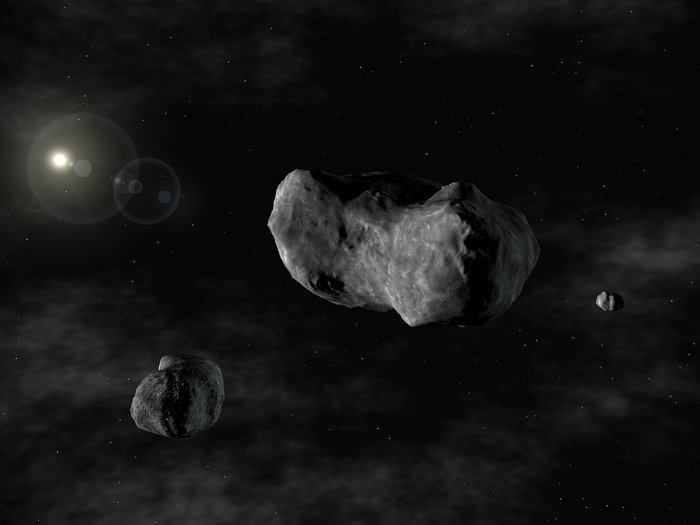 Artist rendering of the triple system : Romulus, Sylvia, and Remus. This is the first triple asteroid system discovered - two small asteroids orbiting a larger one known since 1866 as 87 Sylvia. Because 87 Sylvia was named after Rhea Sylvia, the mythical mother of the founders of Rome, the twin moons are named after those founders : Romulus and Remus. Sylvia's moons are considerably smaller, orbiting in nearly circular orbits and in the same plane and direction. The closest and newly discovered moonlet, orbiting about 710 km from Sylvia, is Remus, a body only 7 km across and circling Sylvia every 33 hours. The second, Romulus, orbits at about 1,360 km in 87.6 hours and measures about 18 km across. The asteroid 87 Sylvia is one of the largest known from the asteroid main belt, and is located about 3.5 times further away from the Sun than the Earth, between the orbits of Mars and Jupiter. The wealth of details provided by the NACO images show that 87 Sylvia is shaped like a lumpy potato, measuring 380 x 260 x 230 km. It is spinning at a rapid rate, once every 5 hours and 11 minutes.