Changes in the ring nebula around SN 1987A 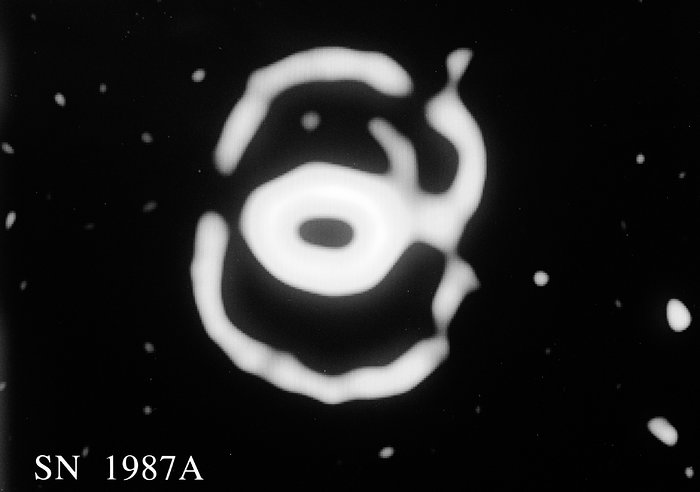 This computer-processed picture is an average of two 15-min exposures, obtained in the light of ionised nitrogen during the morning of December 20, 1993, with the Super Seeing Instrument (SuSI) at the 3.58m ESO New Technology Telescope.

It shows the complex structure of the faint nebulae around SN 1987A in the Large Magellanic Cloud. The inner ring was formed from interaction with matter ejected during an earlier phase by the star that later exploded as a supernova. Spectra and theoretical models suggest that the faint outer nebular loops trace the outer rim of a large bubble which was also formed by outflowing matter. The supernova itself, at the centre of the inner ring, emits very little light in the narrow spectral band used for this observation and is not visible on this picture.

Because of the very large range of intensities in these nebulosities, and in order to better show the structure, the intensities of the low surface brightness parts of the image have been greatly enhanced, relative to the brighter parts.

Most of the light from the inner ring is concentrated in a narrow, bright band which has been given relatively little prominence in this modified picture. However, the uneven structure, in particular the greater intensity in the North-West (upper right part), is clearly visible. This picture shows very faint structures and therefore a greater overall width of the ring than do earlier pictures.

The nominal resolution of this picture as determined by the size of the stellar images in the field, is 0.20 arcsec. The gap in the upper right quadrant of the outer ring is an artifact caused by subtracting a bright star at this location. The pixel size is 0.032 arcsec.