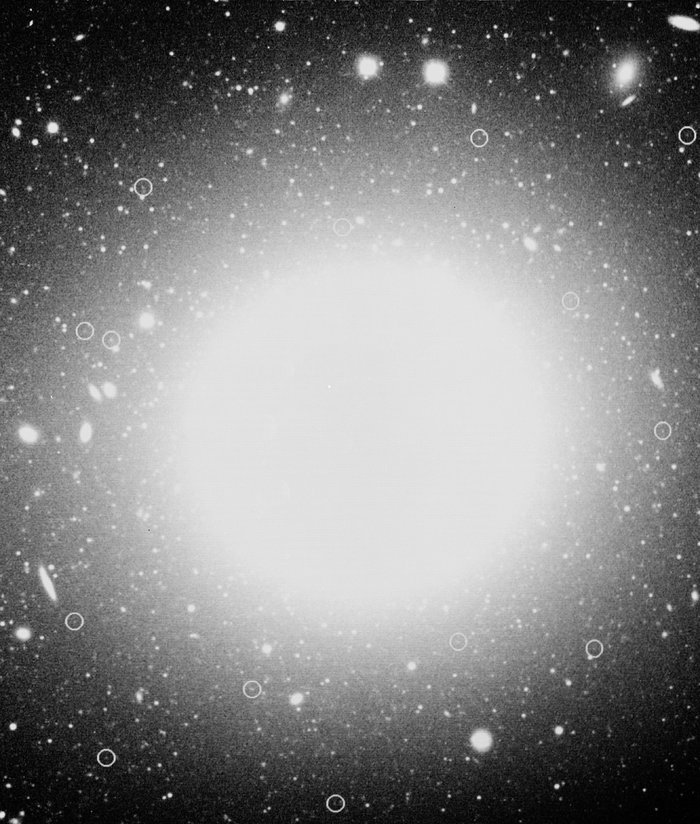 This photo shows some of the very faint planetary nebulae in the giant elliptical galaxy NGC 1399, recently observed by an international team of astronomers with the ESO 3.5-metre New Technology Telescope (NTT). Their magnitudes are around 27 and they are indicated with circles. The central part of the galaxy is "overexposed'' on this picture, in order to better bring out point-like images of the planetary nebulae.

The observers were Magda Arnaboldi and Ken Freeman from the Mount Stromlo Observatory in Australia. They obtained the spectra and measured the velocities of 37 planetary nebulae in this galaxy that is located at the centre of the southern Fornax cluster of galaxies, at a distance of about 50 million light-years. The total mass of the galaxy can be inferred from the measured motions and was found to be about ten times larger than the combined mass of the stars and nebulae seen in this galaxy. This indicates the presence of a very substantial amount of dark, "invisible'' matter in NGC 1399.

The ESO Multi-Mode Instrument (EMMI) was used in RILD mode with MOS masks, the No. 5 grism and the Loral FA 2048 CCD, giving a dispersion of 1.7 per pixel. The 500.7 nm spectral line of [O III] was isolated with an interference filter with central wavelength 505 nm and of intermediate width (FWHM = 50 nm) in front of the grism. This reduced the wavelength range of each spectrum and increased the number of slitlets in each MOS mask. The total integration time for each field was 5 hours, split into shorter exposures. The achieved accuracy of the measured radial velocities is about 70 km/s, which is much smaller than the velocity dispersion of the galaxy.

This CCD picture was obtained by Robin Ciardullo (Pennsylvania State University, U.S.A.) through a narrow-band [O III] filter with the 4-metre reflector at the Cerro-Tololo Interamerican Observatory in Chile, and kindly made available to the Australian observers for identification purposes during the above mentioned observations at the ESO NTT. The scale is 1 arcmin = 3.4 cm; the field measures 6.8 x 7.9 arcmin. North is up and East is to the right.