The planetary nebula around Sakurai's Object 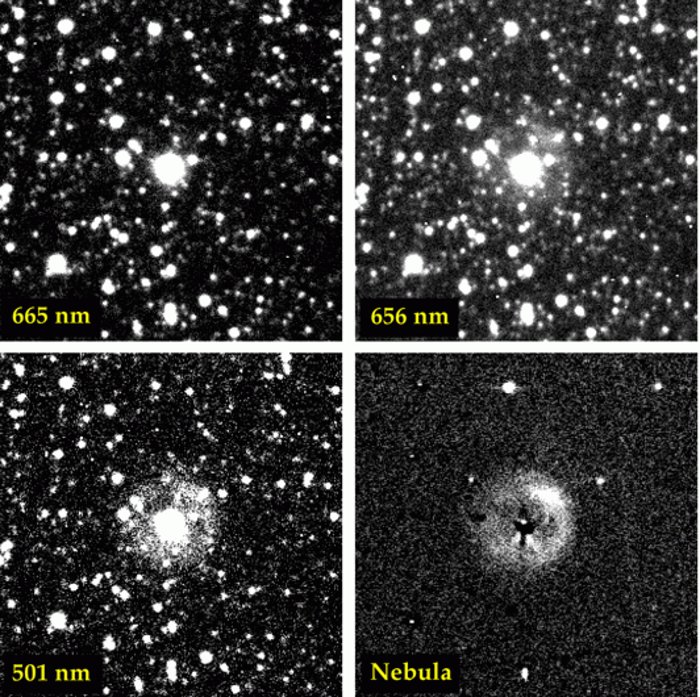 These CCD images show Sakurai's new star and the planetary nebula surrounding it. The images were obtained with the CCD Camera at the Dutch 0.9-metre telescope at the ESO La Silla Observatory by Hilmar Duerbeck (European Southern Observatory). Each of the four fields measures about 1.4 x 1.4 arcmin. North is up and East is to the left.

The upper-left image was taken through a narrow-band filter (spectral interval 660.9 - 668.8 nm) in which only light coming from the star (the 'spectral continuum') is recorded. The image on the upper-right was taken through a narrow-band filter centred on the hydrogen H-alpha-line (652.5 - 660.7 nm). It shows that the hydrogen in the planetary nebula around the star radiates strongly.

The shape and dimension of the nebula is much better defined in the lower-right image, which was produced by subtracting the continuum image from the H-alpha image, leaving only the emission of the nebula. It has an almost circular shape - with the strongest emission in the north-west quadrant - and a diameter of about 32 arcsec. The nebula also appears to have the same shape and dimension in the fourth (lower-left) image taken through another narrow band-filter (497.9 - 503.5 nm) which isolates the green light associated with the "forbidden" emission lines of doubly ionized oxygen ([O III]).