ADONIS mosaic of the Her 36 area in M8 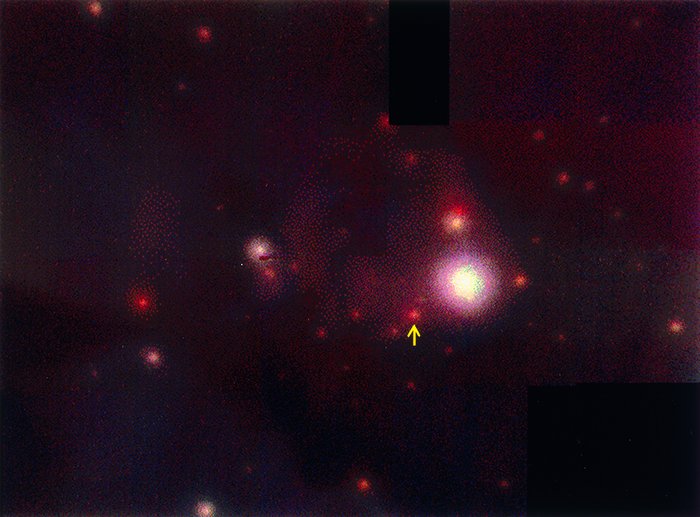 This photo shows a true-colour, composite mosaic of several ADONIS near-infrared frames, covering a 35 x 26 arcsec area around a newly found star in the Lagoon Nebula. This spectacular interstellar nebula, also known as Messier 8 or M8 is see in the direction of the southern constellation of Sagittarius.

The brightest object in this area, the star Her 36, is surrounded by a dense cluster of (young) stars. The arrow points to the central star of G5.97-1.17, an ultra-compact HII-region (UCHR). Observations described in ESO Press Release eso9708 (9 April 1997) have shown that this star is surrounded by a proplyd (PROto-PLanetarY Disk).

The colour coding corresponds to the three wavelength regions of the frames used to make the mosaic, i.e. blue represents the J-filtre (at 1.2 microns), green the H-filter (1.6 microns) and red the K-filtre (2.2 microns). In this image, hot stars appear white and cool ones red.