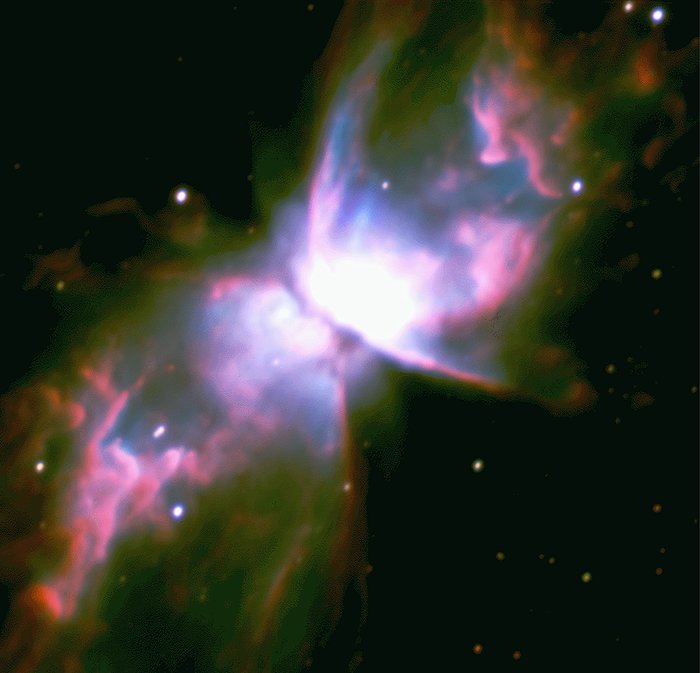 This splendid colour image of a famous southern Planetary Nebula, NGC 6302 or the Bug Nebula (sometimes nicknames the Butterfly Nebula), was obtained by combining blue, yellow and red images obtained on May 22, 1998, with 10 minute exposures and an image quality better than 0.6 arcseconds.

Towards the end of their life, some massive stars expand to giant dimensions. They shed most of the hydrogen in their outer layers as a strong "stellar wind", before they contract towards a final compact stage as "white dwarfs".

After this ejection process, the star remains thousands of times brighter and also much hotter than the Sun during a few thousand years. Its strong ultraviolet radiation has the effect of ionizing the previously ejected gas, which then shines before it disperses into interstellar space. The resulting nebulae (traditionally referred to as Planetary Nebulae , because of their resemblance to a planet in a small telescope) often exhibit very complex morphologies.

The Butterfly Nebula belongs to the class of bipolar nebulae, as this picture clearly illustrates. A dark, dusty and disc-like structure - seen edge-on in this image - obscures the central star from our view. However, its strong radiation escapes perpendicular to the disk and heats and illuminates the material deposited there by the stellar wind.

The origin of the dark disk may be due to the central star being a member of a double star system. This has been shown to be the case in some other bipolar nebulae in which, contrary to the Butterfly Nebula, there is a direct view towards the star.