Spectrum of stars in NGC 6822 and the Small Magellanic Cloud 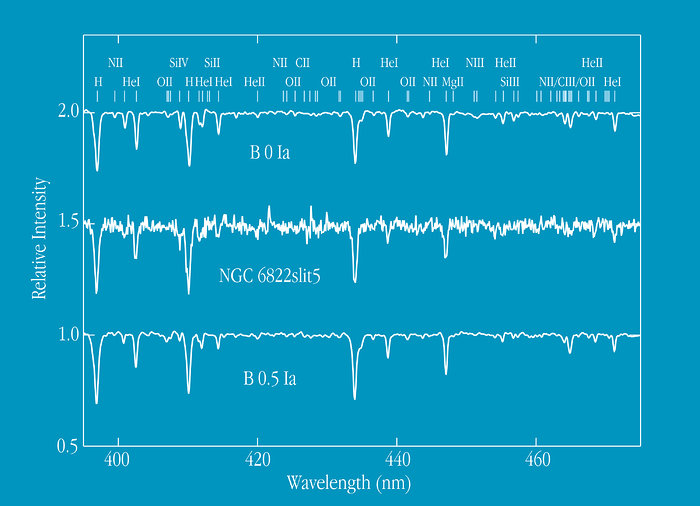 This chart displays a FORS1 spectrum of a blue supergiant in NGC 6822 (in the middle), as compared with those of supergiant stars (upper and lower) of similar atmospheric temperature in the Small Magellanic Cloud (SMC), another irregular dwarf galaxy in the Local Group. The observations were carried out by the FORS Commissioning Team on October 1, 1998, using the Multiple Object Spectroscopy (MOS) mode of FORS1. A total of 11 stars in NGC 6822 were observed simultaneously with an exposure time of 30 min. The visual magnitude of supergiant star centered on slit no. 5 is V = 18.11 and the spectral type is in the interval O9.5Ia - B0Ia. It is apparent from the figures that many spectral lines in the supergiant star in NGC 6822 are of similar strength as those in the SMC. This confirms the earlier finding that NGC 6822 has a different chemical composition — a lower content of heavy elements (or "metallicity") — than what is observed in our Galaxy.