The dark cloud B68 at different wavelengths 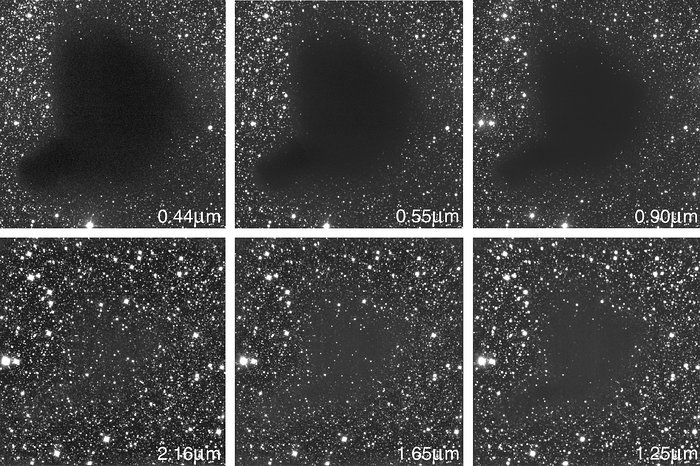 B68 is a dark cloud situated at a distance of about 500 light-years (160 pc) towards the southern constellation Ophiuchus (The Serpent-holder). This image represents the sky area of the so-called Bok globule Barnard 68 --- nicknamed the Dark Cloud -- imaged in six different wavebands, clockwise from the blue to the near-infrared spectral region. Three of these frames ("blue" B-band at wavelength 440 nm = 0.44 µm; "green-yellow" V-band at 0.55 µm; near-infrared I-band at 0.90 µm) were obtained with the FORS1 instrument at the VLT ANTU telescope and three with SOFI at the NTT through near-infrared filters (J-band at 1.25 µm; H-band at 1.65 µm; Ks-band at 2.16 µm). It is evident that the obscuration caused by the cloud diminishes dramatically with increasing wavelength. Since the outer regions of the cloud are less dense than the inner ones, the apparent size of the cloud also decreases, as more background stars shine through the outer parts. Each frame covers an area of 4.9 x 4.9 arcmin 2. North is up and East is left.