A new era for astronomy 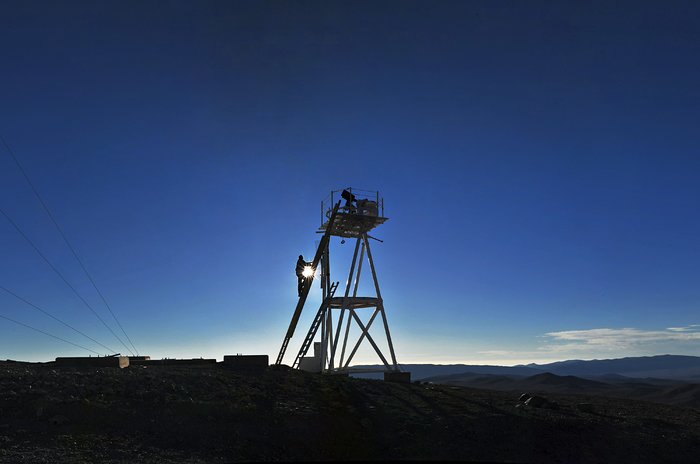 As the Sun sets over Cerro Armazones, plans are well advanced for building the world's biggest “eye on the sky”: ESO's European Extremely Large Telescope (E-ELT). With a primary mirror 39 metres in diameter, the E-ELT will dwarf all existing visible-light telescopes.

Site selection has been a vital part of the plans for the E-ELT. Over the course of several years a team of experts investigated locations around the world, looking for the best place to host such an ambitious project. The site for the E-ELT must be remote enough not to be influenced by problems such as light pollution, but also needs the necessary infrastructure for the construction and operation of the observatory, and to accommodate the over 150 staff who will eventually work there. Monitoring stations, such as the one shown here, were set up to test site conditions scientifically by measuring parameters that included atmospheric turbulence and levels of water vapour. By better understanding the atmosphere at a site, the team were able to determine the best potential site for the highest quality science.

The list of potential sites included areas in Argentina, in Chile, in Morocco and in Spain. Cerro Armazones in Chile, shown in this photograph, was finally selected as the E-ELT site because it has the best balance of sky quality across all aspects and it can be operated in an integrated fashion with the existing ESO Paranal Observatory nearby. Armazones is about 20 km from Paranal and 130 km south of the nearest town. It is 3046 metres above sea level and boasts almost 350 cloudless nights a year.

Constructing the E-ELT is a huge undertaking that will take several years. The go-ahead for construction is planned for 2011, with start of operations planned for early in the next decade. When observations begin, the E-ELT will herald a new era for astronomy.