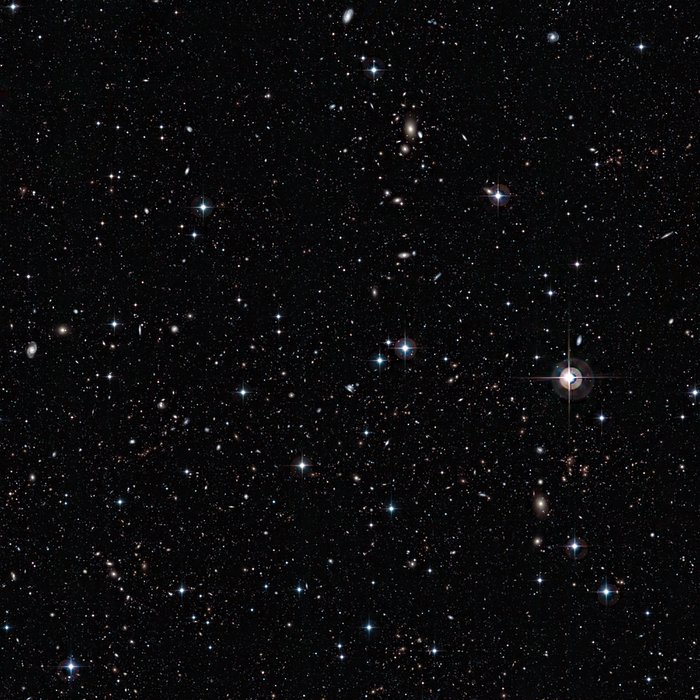 This rich scattering of galaxies was captured using the Wide Field Imager attached to the MPG/ESO 2.2-metre telescope at ESO’s La Silla Observatory in Chile. The thousands of galaxies contained in this small area of sky give a glimpse into the Universe’s distant past, whilst also acting as a powerful reminder of the immense scale of the cosmos.

This image was taken as part of the COMBO-17 project (Classifying Objects by Medium-Band Observations in 17 Filters), in which detailed surveys of five small patches of sky were made through 17 different coloured filters. The area of sky covered by each of the five regions is about the same area as that covered by the full Moon. The survey has produced a remarkable haul of celestial specimens. For example, across just three of these regions over 25 000 galaxies have been identified.

Just below the bright stars in the centre of the image is the galaxy cluster Abell 226. It was first noted by astronomer George Ogden Abell in his catalogue of galaxy clusters of 1958. The galaxies in Abell’s clusters, including Abell 226, are only up to a few billion light-years away. But behind these objects, even fainter, more distant galaxies were hiding.

The COMBO-17 study has unveiled these hidden galaxies, thanks to long exposure images from the MPG/ESO 2.2-metre telescope at ESO’s La Silla Observatory in Chile. Some of the most distant flecks of light visible in this photo represent galaxies whose light has been travelling towards us for about nine or ten billion years. That means that the galaxies in this image have a great variety of ages, some of them are quite similar to the Milky Way, while others reveal what the Universe was like when it was much younger.