The heart of the Milky Way, for Valentine’s Day 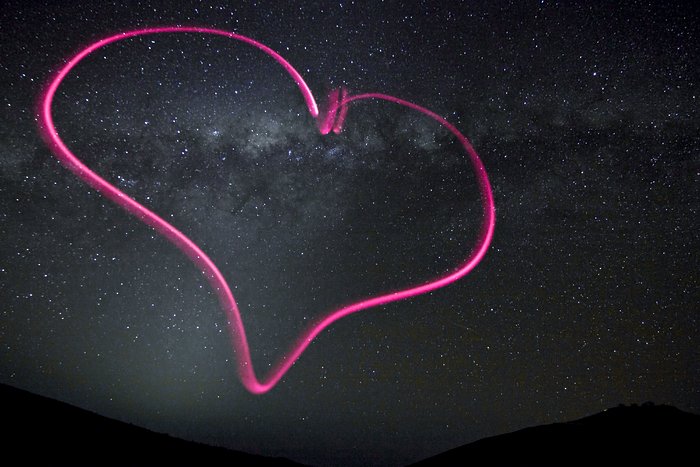 There is a lot to love about astronomy, and — in time for Valentine's Day — photographer Julien Girard offers a "heartfelt” example in this image. A bright pink symbol of love appears to float ethereally against the backdrop of the night sky over ESO's Paranal Observatory in northern Chile. Girard drew the heart in the air by shining a tiny flashlight keychain at the camera during a 25-second exposure with a tripod.

The central region of the Milky Way appears in the middle of the heart, as the plane of our galaxy stretches across the image. The stars of the constellation of Corona Australis (The Southern Crown) form a glittering arc of jewels at the top of the heart's left lobe. The diffuse glow to the left of the heart's lowest point is zodiacal light, caused by the scattering of light from the Sun by dust particles in the Solar System.

On the far right horizon, the 8.2-metre telescopes of the ESO Very Large Telescope (VLT) facility stand out in silhouette atop Cerro Paranal. The lights of a car driving down from the observatory platform can be seen just to the left of the telescopes.

Julien Girard is an ESO astronomer based in Chile, who works at the VLT. He is the instrument scientist for the NACO adaptive optics instrument on the VLT’s Unit Telescope 4. He submitted this photograph to the Your ESO Pictures Flickr group, from where it was picked out as an ESO Picture of the Week.