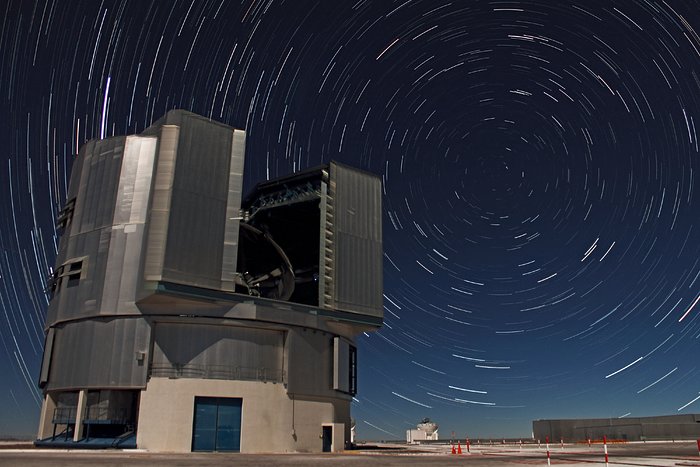 This view shows one of the Unit Telescopes of ESO’s Very Large Telescope (VLT) sitting beneath bright star trails circling the south celestial pole, a point in the sky that lies in the southern constellation of Octans (The Octant). These trails are arcs of light that trace out a star’s observed movement across the sky as the Earth slowly rotates. To capture these star trails on camera, many exposures were taken over time and combined to give the final appearance of circular tracks.

Illuminated by moonlight, the telescope in the foreground is just one of the four Unit Telescopes (UTs) that make up the VLT at Paranal, Chile. Following the inauguration of the Paranal site in 1999, each UT was named in the language of the native Mapuche tribe. The names of the UTs — Antu, Kueyen, Melipal, and Yepun — represent four prominent and beautiful features of the sky: the Sun, the Moon, the constellation of the Southern Cross, and Venus, respectively. The UT in this photograph is Yepun, also known as UT4.

This image was taken by ESO Photo Ambassador Farid Char. Char works at ESO’s La Silla–Paranal Observatory, and is a member of the site-testing team for the European Extremely Large Telescope (E-ELT), a new ground-based telescope that will be the largest optical/near-infrared telescope in the world when it is completed in the early 2020s.