Under the spell of the Magellanic Clouds 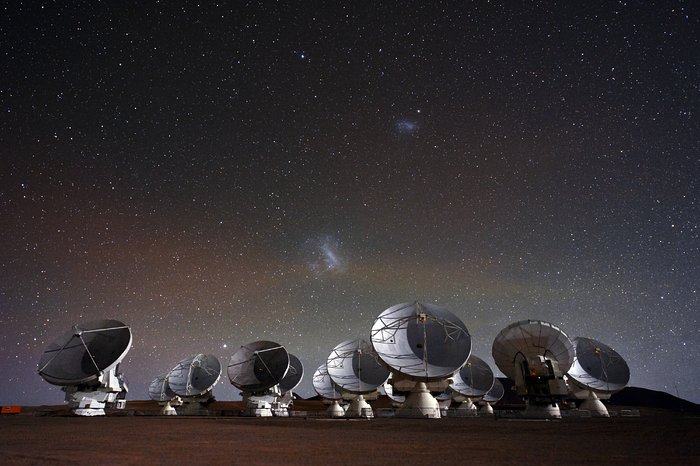 This beautiful image of the Atacama Large Millimeter/submillimeter Array (ALMA), showing the telescope’s antennas under a breathtaking starry night sky, comes from Christoph Malin, an ESO Photo Ambassador. This is a still frame taken from one of his painstakingly created time-lapse videos of ALMA, which are also available (see ann12099).

Located on the Chajnantor Plateau at an elevation of 5000 metres, ALMA is the world’s most powerful telescope for studying the Universe at submillimetre and millimetre wavelengths. Construction work for ALMA will be completed in 2013, and a total of 66 of these high-precision antennas will be operating on the site.

Glowing brightly in the sky, the Large and Small Magellanic Clouds stand out above the antennas. These nearby irregular dwarf galaxies are conspicuous objects in the southern hemisphere, even with the naked eye. These galaxies are both orbiting the Milky Way — our galaxy — and there is evidence that both have been greatly distorted by their interaction with the Milky Way as they travel close to it.