Toconao seen from above 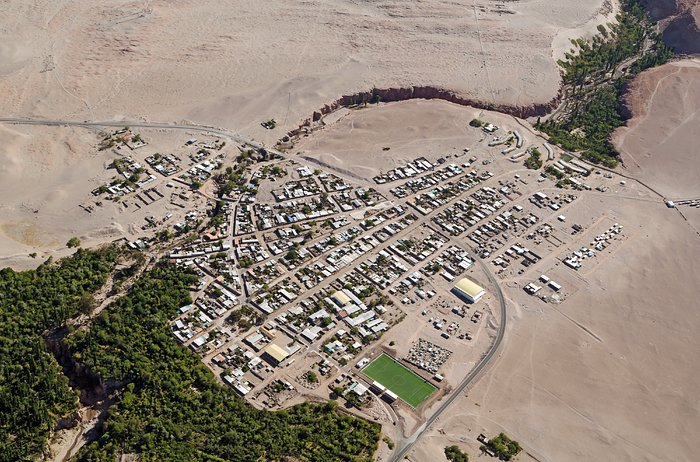 The small village of Toconao is the closest settlement to the largest astronomy project in existence, ALMA [1], the Atacama Large Millimeter/submillimeter Array. Toconao has less than 800 inhabitants and is located at 2475 metres above sea level in a natural oasis fed by a small mountain river on the outskirts of the driest desert in the world, the Atacama. The river doesn’t flow all year, but the local farmers have wisely built a network of dams and channels to regulate the flow of water so that they can have crops all year round.

When looking closely at this image, some buildings can be spotted, made of traditional materials such as adobe and volcanic rock, like the San Lucas Church and Bell Tower, on the bottom left of the image.

In parallel with their scientific work, ALMA staff have worked with the Atacameño Elders in Toconao and other areas to recover the vision of the Universe of their culture, aiming to preserve this cultural and scientific heritage for later generations.

ALMA has also been supporting an educational improvement plan at School E-21, a rural public education establishment in Toconao, since 2008. This plan, endorsed by the community, is focused on improving education in science and english.

This aerial image was taken by the two crew members of the ORA Wings for Science project, Clémentine Bacri and Adrien Normier, who flew a special eco-friendly ultralight aeroplane [2] on a year-long journey around the world to help out scientists, with aerial capabilities ranging from air sampling to archaeology, biodiversity observation and 3D terrain modelling.

ESO has an ongoing outreach partnership with this non-profit organisation. Short movies and amazing pictures that are produced during the flights will be used for educational purposes and for promoting local research. Their circumnavigation started in June 2012 and finished in June 2013 with a landing at the Paris Air Show.

[2] The ultralight aircraft is a NASA-award winning Pipistrel Virus SW 80 using only 7 litres of fuel per 100 kilometres — less than most cars.