Deep view of the Large and Small Magellanic Clouds 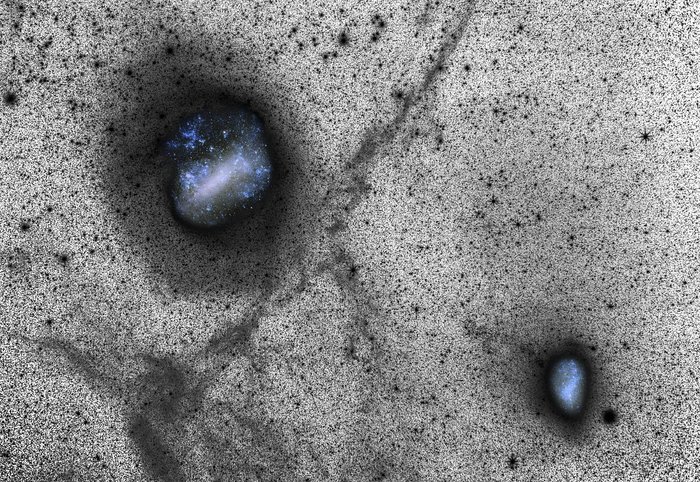 Each of the thousands of spots in this new image represents a distant star, and the glittering blue holes reveal glimpses of our neighbouring galaxies, the Large and Small Magellanic Clouds. Although this image looks as if it was made on a large scale telescope it was in fact captured from ESO’s La Silla Observatory using a portable setup consisting of a SBIG STL-11000M CCD camera and a Canon prime lens. It was presented in a scientific paper alongside state-of-the art simulations, in an exciting example of how a small camera, a fast lens, a long exposure time and one of the world’s best astronomical sites can reveal huge faint features better than even a big telescope.

This deep image was captured using the LRGB method, and provides an insight into the actual process of creating spectacular astrophotography. Many challenges face those attempting to photograph the night sky, including interference from light sources other than the object being photographed, and capturing objects in sufficient depth.

Trying to maximise the signal received from the target, whilst minimising input from other sources — known as noise — is a crucial aspect of astrophotography. The optimisation of the signal to noise ratio is far more easily achieved in black-and-white than in colour. Therefore a clever trick often employed to capture a high-quality image is the use of a luminance exposure, which produces richly detailed monochrome images like the one seen here. Colour details from images taken through colour filters can then be overlaid or inset, as the Magellanic Clouds have been here.