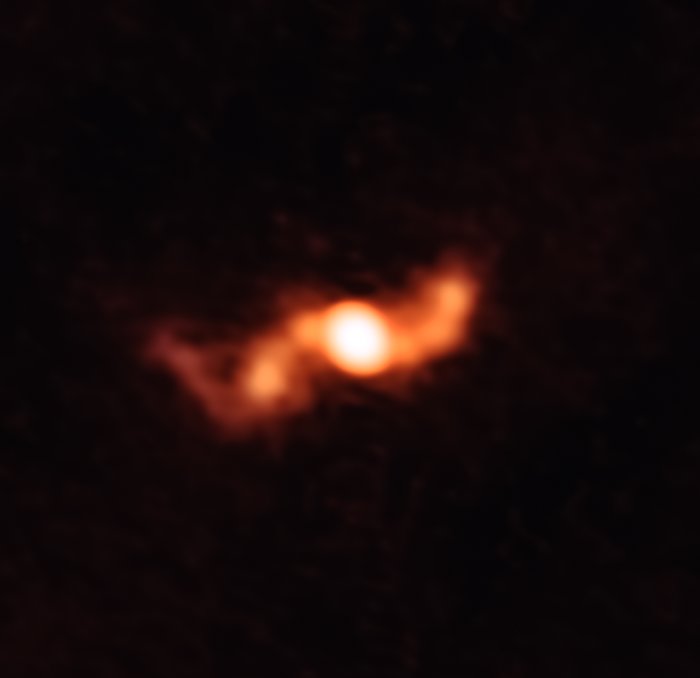 This is SS 433, a microquasar first discovered forty years ago and located about 18 000 light-years away in the constellation of Aquila (The Eagle). This image, captured for the very first time at submillimeter wavelengths by the Atacama Large Millimeter/submillimeter Array (ALMA), is special because it shows the jets emitted by a hot, swirling disc of material encircling the black hole at SS 433’s centre. Owing to its relative proximity, SS 433 is a particularly useful object for researchers looking to learn more about microquasars and the jets they emit.

The corkscrew shape visible here is created by a phenomenon known as precession; as they move outwards through space, these two jets are slowly tumbling around an axis in a similar way to the motion of a gyroscope or a spinning top slowing down, the orientation of their rotational axes changing as they do so. The scale of this corkscrew is enormous, at 5000 times the size of the Solar System.

One remarkable aspect of this observation is that its detailed shape was entirely predicted from spectroscopic measurements by the Global Jet Watch telescopes in the preceding year before the ALMA observations were made. The sequence of these observations allowed researchers to make and test predictions about the paths the jets would take, representing a new milestone in the study of microquasars. The observations have also resolved the question of why the jets are still hot at such great distances from their origin — ALMA’s sensitivity enabled researchers to identify that reheating of the plasma occurs when successive jet surges expand and collide with one another.