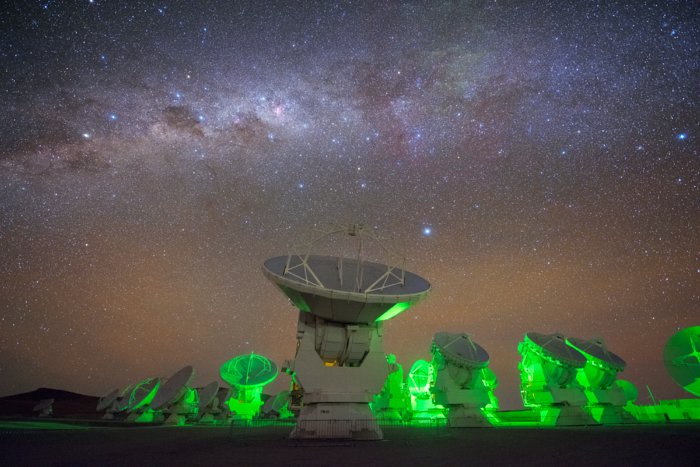 The antennas comprising the Atacama Large Millimeter/submillimeter Array (ALMA), in which ESO is a partner, appear to emit an eerie, vivid shade of green light in this Picture of the Week. Situated high up on the isolated Chajnantor plateau in Chile’s Atacama Desert, ALMA seems like the perfect place for friendly extraterrestrials to discreetly land and make contact…but something far more mundane is responsible for this otherworldly green glow. The light emanates from indicator lights, which show whether or not it is safe for staff to approach the antennas. A green light as pictured indicates that it’s safe to approach.

An alien world is, however, visible above the antennas. In the top left of the image, in the clear Chilean sky, two bright stars can be seen next to each other within the band of the Milky Way. These stars are often called The Pointers, as they “point” towards the bright diamond of the Southern Cross (Crux) just to their right. The one nearest to the Southern Cross is Beta Centauri, located some 400 light-years away, and the more distant star is Alpha Centauri, the closest star system to the Sun at a distance of only 4.37 light-years. This system contains the red dwarf star Proxima Centauri; in 2016, astronomers used ESO telescopes to find evidence of an Earth-sized planet orbiting Proxima Centauri in the habitable zone.