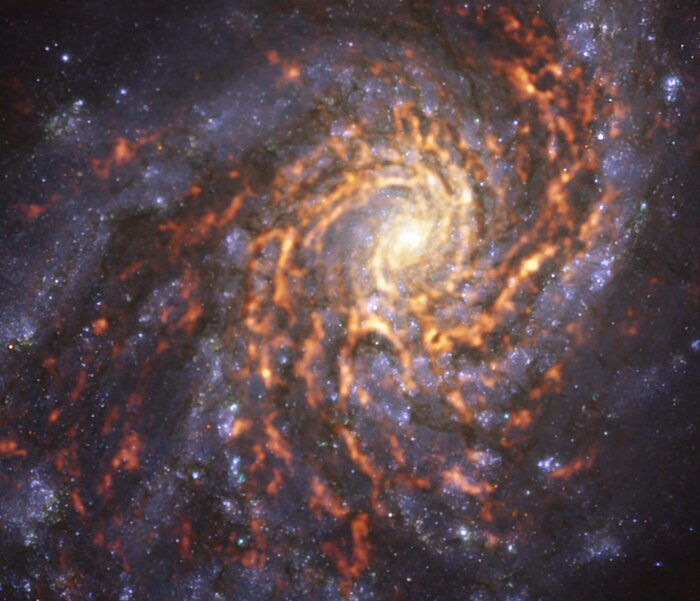 In this picture of the week we can see the well-defined arms of the spiral galaxy NGC 4254, also known as the Coma Pinwheel or Messier 99. It’s called a grand design spiral galaxy because of its distinctive pinwheel shape with prominent arms. Since Charles Messier first observed it in the 18th century, modern technology has allowed us to observe galaxies like this in significantly greater detail.

This image is a composite of data taken with ESO’s Very Large Telescope (VLT) and the Atacama Large Millimeter/submillimeter Array (ALMA), co-owned by ESO. The VLT data, shown in blue and purple tones, was captured with the Multi-Unit Spectroscopic Explorer (MUSE) instrument, mapping the distribution of stars. The ALMA data –– shown here by the red and orange regions –– originates from cold clouds of gas which can eventually collapse into stars. Comparing these two datasets allows for a better understanding of how stars form.

This image was taken as part of the Physics at High Angular resolution in Nearby GalaxieS (PHANGS) survey, which produces high-resolution images of nearby galaxies across all wavelengths of light. This will allow astronomers to learn more about the diverse range of galactic environments found in our Universe.