Lyα sensitivities vs. redshift for MOSAIC compared with the expected fluxes and the deepest Lyα observations available at z>5 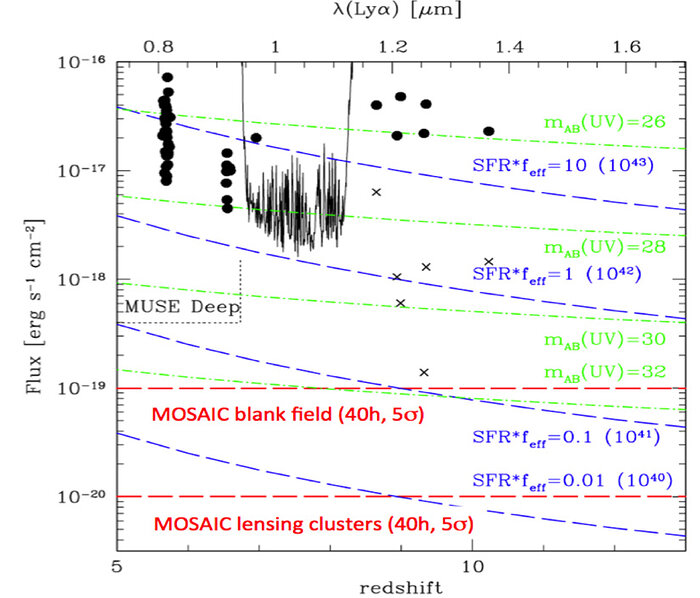 MOSAIC will measure Lyα line fluxes up to ~ 40 times deeper than current samples at z ~7 (blank fields), ~ 40 times deeper than current searches for Lyα emission from z~7-8.5 (lensed galaxies), and >100 times deeper than the current searches at z~8-10. It will also extend Lyα searches up to z~13, and undertake spectroscopy of large numbers of galaxies down to mAB~30, which are presumably the dominant population of reionisation sources, unachievable with other planned ELT instruments. Finally, it will reach an effective Lyα transmission (feff) of 10% for the faintest objects (and lower values for the brighter objects). Blue dashed lines: Expected fluxes for a range of SFR×feff, ranging from 10 to 0.01 M⨀/yr, where feff is the effective Lyα transmissions. Green dash-dotted lines: Expected Lyα flux for star-forming galaxies, with their rest-frame UV continuum magnitudes (feff = 1). Filled circles: Observations from Shimasaku et al. (2006), Kashikawa et al. (2006), and Ota et al. (2008) at z = 5.7, 6.5, and 7, respectively. Crosses: Intrinsic fluxes for lensed candidates from Stark et al. (2007). Black spectrum: Flux limit from deep Keck-NIRSPEC spectroscopy (Richard et al. 2008). MOSAIC will provide a sensitivity gain of a factor of ≥40, potentially extending up to z~13. For galaxies lensed by clusters, we will be able to measure IGM transmissions down to even fainter physical limits.