Subscribe to receive news from ESO in your language!
Search results for ‘releases with Facility used matching 'Very Large Telescope'.’ 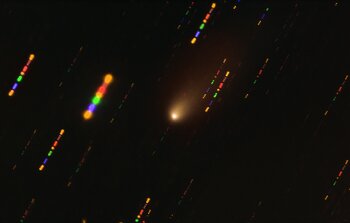 eso2106 — Science Release
First interstellar comet may be the most pristine ever found
30 March 2021: New observations with the European Southern Observatory’s Very Large Telescope (ESO’s VLT) indicate that the rogue comet 2I/Borisov, which is only the second and most recently detected interstellar visitor to our Solar System, is one of the most pristine ever observed. Astronomers suspect that the comet most likely never passed close to a star, making it an undisturbed relic of the cloud of gas and dust it formed from.
Read more 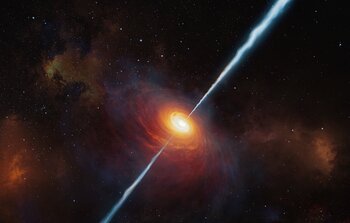 eso2103 — Science Release
Most distant quasar with powerful radio jets discovered
8 March 2021: With the help of the European Southern Observatory’s Very Large Telescope (ESO’s VLT), astronomers have discovered and studied in detail the most distant source of radio emission known to date. The source is a “radio-loud” quasar — a bright object with powerful jets emitting at radio wavelengths — that is so far away its light has taken 13 billion years to reach us. The discovery could provide important clues to help astronomers understand the early Universe.
Read more 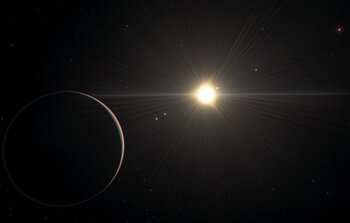 eso2102 — Science Release
Puzzling six-exoplanet system with rhythmic movement challenges theories of how planets form
25 January 2021: Using a combination of telescopes, including the Very Large Telescope of the European Southern Observatory (ESO’s VLT), astronomers have revealed a system consisting of six exoplanets, five of which are locked in a rare rhythm around their central star. The researchers believe the system could provide important clues about how planets, including those in the Solar System, form and evolve.
Read more 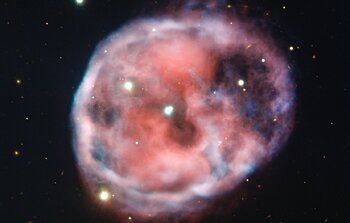 eso2019 — Photo Release
Stars and Skulls: new ESO image reveals eerie nebula
30 October 2020: This ethereal remnant of a long dead star, nestled in the belly of The Whale, bears an uneasy resemblance to a skull floating through space. Captured in astounding detail by ESO’s Very Large Telescope (VLT), the eerie Skull Nebula is showcased in this new image in beautiful bloodshot colours. This planetary nebula is the first known to be associated with a pair of closely bound stars orbited by a third outer star.
Read more 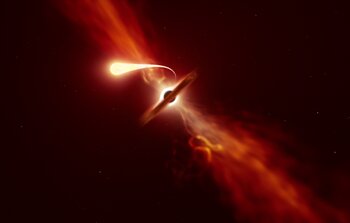 eso2018 — Science Release
Death by Spaghettification: ESO Telescopes Record Last Moments of Star Devoured by a Black Hole
12 October 2020: Using telescopes from the European Southern Observatory (ESO) and other organisations around the world, astronomers have spotted a rare blast of light from a star being ripped apart by a supermassive black hole. The phenomenon, known as a tidal disruption event, is the closest such flare recorded to date at just over 215 million light-years from Earth, and has been studied in unprecedented detail. The research is published today in Monthly Notices of the Royal Astronomical Society.
Read more 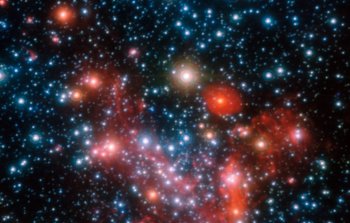 eso2017 — Organisation Release
2020 Nobel Prize in Physics awarded for research with ESO telescopes on Milky Way's supermassive black hole
6 October 2020: Reinhard Genzel and Andrea Ghez have jointly been awarded the 2020 Nobel Prize in Physics for their work on the supermassive black hole, Sagittarius A*, at the centre of our galaxy. Genzel, Director at the Max Planck Institute for Extraterrestrial Physics in Germany, and his team have conducted observations of Sagittarius A* for nearly 30 years using a fleet of instruments on European Southern Observatory (ESO) telescopes.
Read more 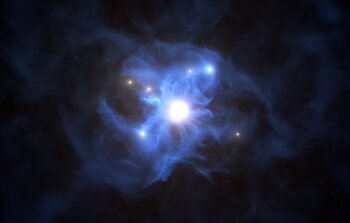 eso2016 — Science Release
ESO telescope spots galaxies trapped in the web of a supermassive black hole
1 October 2020: With the help of ESO’s Very Large Telescope (VLT), astronomers have found six galaxies lying around a supermassive black hole when the Universe was less than a billion years old. This is the first time such a close grouping has been seen so soon after the Big Bang and the finding helps us better understand how supermassive black holes, one of which exists at the centre of our Milky Way, formed and grew to their enormous sizes so quickly. It supports the theory that black holes can grow rapidly within large, web-like structures which contain plenty of gas to fuel them.
Read more 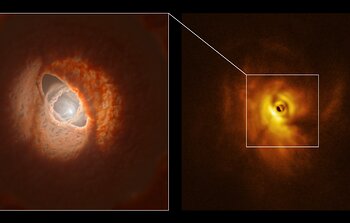 eso2014 — Science Release
New Observations Show Planet-forming Disc Torn Apart by its Three Central Stars
3 September 2020: A team of astronomers have identified the first direct evidence that groups of stars can tear apart their planet-forming disc, leaving it warped and with tilted rings. This new research suggests exotic planets, not unlike Tatooine in Star Wars, may form in inclined rings in bent discs around multiple stars. The results were made possible thanks to observations with the European Southern Observatory’s Very Large Telescope (ESO’s VLT) and the Atacama Large Millimeter/submillimeter Array (ALMA).
Read more 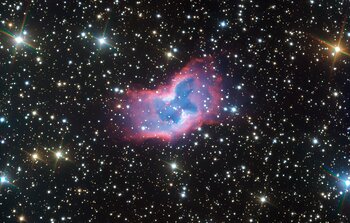 eso2012 — Photo Release
Stunning Space Butterfly Captured by ESO Telescope
30 July 2020: Resembling a butterfly with its symmetrical structure, beautiful colours, and intricate patterns, this striking bubble of gas — known as NGC 2899 — appears to float and flutter across the sky in this new picture from ESO’s Very Large Telescope (VLT). This object has never before been imaged in such striking detail, with even the faint outer edges of the planetary nebula glowing over the background stars.
Read more 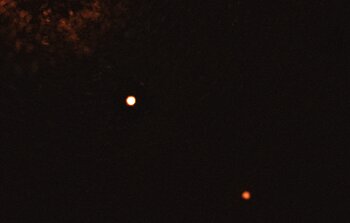 eso2011 — Photo Release
First Ever Image of a Multi-Planet System around a Sun-like Star Captured by ESO Telescope
22 July 2020: The European Southern Observatory’s Very Large Telescope (ESO’s VLT) has taken the first ever image of a young, Sun-like star accompanied by two giant exoplanets. Images of systems with multiple exoplanets are extremely rare, and — until now — astronomers had never directly observed more than one planet orbiting a star similar to the Sun. The observations can help astronomers understand how planets formed and evolved around our own Sun.
Read more 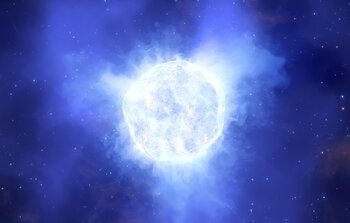 eso2010 — Science Release
A Cosmic Mystery: ESO Telescope Captures the Disappearance of a Massive Star
30 June 2020: Using the European Southern Observatory’s Very Large Telescope (VLT), astronomers have discovered the absence of an unstable massive star in a dwarf galaxy. Scientists think this could indicate that the star became less bright and partially obscured by dust. An alternative explanation is that the star collapsed into a black hole without producing a supernova. “If true,” says team leader and PhD student Andrew Allan of Trinity College Dublin, Ireland, “this would be the first direct detection of such a monster star ending its life in this manner.”
Read more 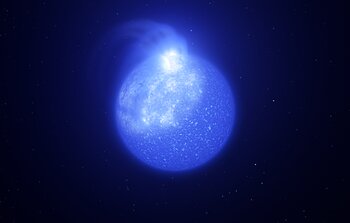 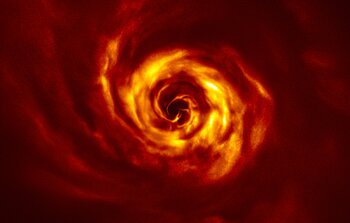 eso2008 — Photo Release
ESO Telescope Sees Signs of Planet Birth
20 May 2020: Observations made with the European Southern Observatory’s Very Large Telescope (ESO’s VLT) have revealed the telltale signs of a planetary system being born. Around the young star AB Aurigae lies a dense disc of dust and gas in which astronomers have spotted a prominent spiral structure with a ‘twist’ that marks the site where a planet may be forming. The observed feature could be the first direct evidence of a baby planet coming into existence.
Read more 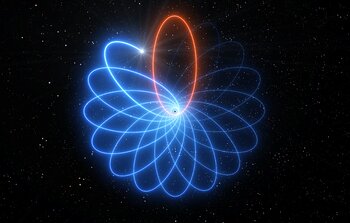 eso2006 — Science Release
ESO Telescope Sees Star Dance Around Supermassive Black Hole, Proves Einstein Right
16 April 2020: Observations made with ESO’s Very Large Telescope (VLT) have revealed for the first time that a star orbiting the supermassive black hole at the centre of the Milky Way moves just as predicted by Einstein’s general theory of relativity. Its orbit is shaped like a rosette and not like an ellipse as predicted by Newton's theory of gravity. This long-sought-after result was made possible by increasingly precise measurements over nearly 30 years, which have enabled scientists to unlock the mysteries of the behemoth lurking at the heart of our galaxy.
Read more 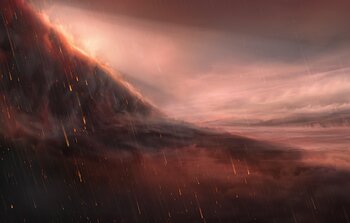 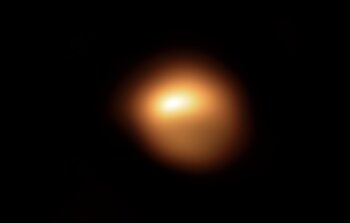 eso2003 — Photo Release
ESO Telescope Sees Surface of Dim Betelgeuse
14 February 2020: Using ESO’s Very Large Telescope (VLT), astronomers have captured the unprecedented dimming of Betelgeuse, a red supergiant star in the constellation of Orion. The stunning new images of the star’s surface show not only the fading red supergiant but also how its apparent shape is changing.
Read more 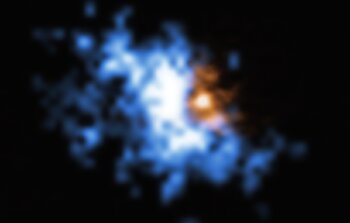 eso1921 — Science Release
ESO Observations Reveal Black Holes' Breakfast at the Cosmic Dawn
19 December 2019: Astronomers using ESO’s Very Large Telescope have observed reservoirs of cool gas around some of the earliest galaxies in the Universe. These gas halos are the perfect food for supermassive black holes at the centre of these galaxies, which are now seen as they were over 12.5 billion years ago. This food storage might explain how these cosmic monsters grew so fast during a period in the Universe’s history known as the Cosmic Dawn.
Read more 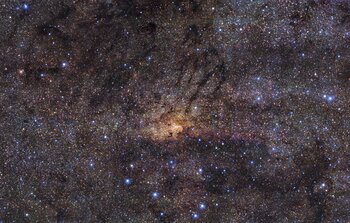 eso1920 — Photo Release
ESO Telescope Images Stunning Central Region of Milky Way, Finds Ancient Star Burst
16 December 2019: ESO’s Very Large Telescope (VLT) has observed the central part of the Milky Way with spectacular resolution and uncovered new details about the history of star birth in our galaxy. Thanks to the new observations, astronomers have found evidence for a dramatic event in the life of the Milky Way: a burst of star formation so intense that it resulted in over a hundred thousand supernova explosions.
Read more 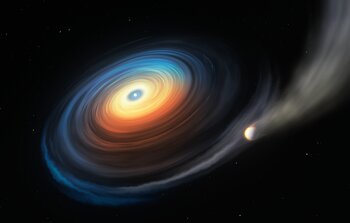 eso1919 — Science Release
First Giant Planet around White Dwarf Found
4 December 2019: Researchers using ESO’s Very Large Telescope have, for the first time, found evidence of a giant planet associated with a white dwarf star. The planet orbits the hot white dwarf, the remnant of a Sun-like star, at close range, causing its atmosphere to be stripped away and form a disc of gas around the star. This unique system hints at what our own Solar System might look like in the distant future.
Read more 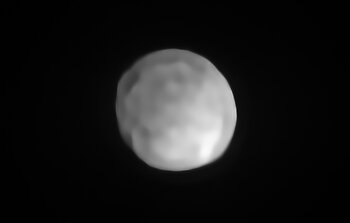 eso1918 — Science Release
ESO Telescope Reveals What Could be the Smallest Dwarf Planet yet in the Solar System
28 October 2019: Astronomers using ESO’s SPHERE instrument at the Very Large Telescope (VLT) have revealed that the asteroid Hygiea could be classified as a dwarf planet. The object is the fourth largest in the asteroid belt after Ceres, Vesta and Pallas. For the first time, astronomers have observed Hygiea in sufficiently high resolution to study its surface and determine its shape and size. They found that Hygiea is spherical, potentially taking the crown from Ceres as the smallest dwarf planet in the Solar System.
Read more
Showing 1 to 20 of 605
Next
Usage of ESO Images, Videos, Web texts and Music